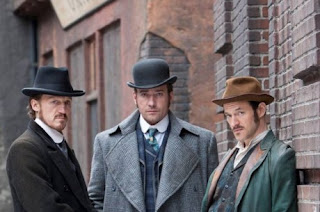 Apologies for my absence last week–I was off at the Jersey Shore (no jokes!), and was not able to post.

This week, I am very excited about the upcoming BBC America show Ripper Street; obviously later than the Regency period, since it references the Jack the Ripper murders, but it’s set in London in 1889, and I like Matthew Macfadyen (even if he’s not nearly as compelling as he was in MI-5 and Pride and Prejudice), and the actor who plays Bronn on Game of Thrones, who I really like.

I’ve been watching Copper on BBC America as well; it’s not nearly as good as it should be, but the setting (1864 NYC, right around the notorious Five Points area), and the badass hero keep me tuning in, at least until other stuff comes around again.

I love historical mystery series–I’m still waiting for someone to turn Barbara Hambly’s Benjamin January series into a screened event–although I could never write a mystery myself.

What historical mystery books or shows or movies are your favorites? ‘s