Prinnyworld or the Real Regency? 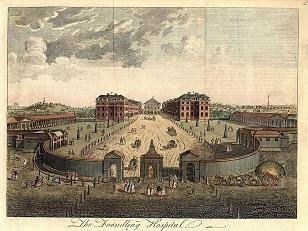 The Word Wenches recently discussed the appeal of the Regency, touching on the popularity of “Regencyland” or “Prinnyworld” as a lovely escape from 21st century stresses.

Which it is. If I’m pampering a wretched cold or for any other reason looking for a light and/or comforting read, I’ll reach for a Georgette Heyer (stories like FREDERICA or COTILLION), a cozy trad, or a sexy Regency-set historical romp.

But that post also made me think about a comment from one of my CPs on a draft of LADY DEARING’S MASQUERADE. Much of the plot revolves around London’s Foundling Hospital, pictured above. (There’s a great book on the subject called CORAM’S CHILDREN by Ruth K. McClure). Anyway, I wrote about the fate of unwanted children in Regency London, how they might be abandoned in parks to die of exposure or cast into the Thames. My CP noted that this was very sad; her way, possibly, of making me consider whether I wanted to include such grisly facts. 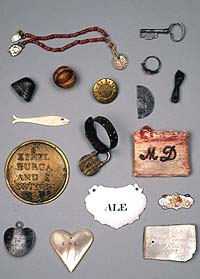 I pondered it a while. I know many readers want to escape into a lush Regency where nothing worse happens than maybe expulsion from Almack’s. But for this story, I wanted to show the stakes, for the foundlings who appear in the book and for the hero and heroine who care about them. I decided to not pull my punches and left that bit in.

I also included other facts I learned in the course of researching the book that I found interesting and yes, heart-wrenching, such as how many of the children were born to servant girls impregnated and abandoned by their masters or their sons, the real rakes of the Regency, unlike the charming scoundrels many of us write (I’ve written them too). I wrote about how the Foundling Hospital, for lack of room, turned away 1 in 5 infants brought to them. I used the fact that mothers left tokens behind to help them reclaim their children if they were ever in a position to care for them.

As I was writing, I kept worrying that I was going too deep into harsh reality. But that’s where this story took me. I’ve written lighter Regencies, too, like THE REDWYCK CHARM. As far as reading tastes go, it depends on my mood. I enjoy excursions into “Prinnyworld” where I can enjoy gorgeous clothes, beautiful settings, witty dialogue. But I also appreciate authors who have gone for some gritty reality. Mary Balogh and Carla Kelly come to mind. I like seeing Regency romance push some of these boundaries. Lots of interesting areas to explore: the Napoleonic Wars, the Luddites, etc…

What do you think? Does reality spoil the Regency experience for you? How real is too real? If you like the boundaries pushed, where?