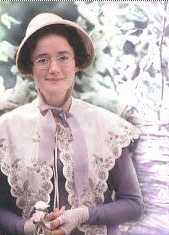 Where would we be without them? Those lovable, annoying, fascinating second-tier characters that pop in and out of the main action, as onlookers, catalysts, or just sheer entertainment. For the writer they have the annoying habit of grabbing the limelight far too often, occasionally getting extremely uppity and demanding a book of their very own.

One of my favorite secondary characters is Miss Bates from Emma, who was so brilliantly portrayed in the movie version by Sophie Thompson (younger sister of Emma), who seems to specialize in annoying characters–her screen credits also include the role of Mary Musgrove in the 1995 Persuasion. Poor Miss Bates, destined for a life of genteel povery and the neverending patronage of Mr. Knightley and his lovely new bride. Have you ever wondered why Miss Bates never married?–other than the fact that her interminable chatter may have frightened suitors off; or is her verbal overflow a defense? She was a vicar’s daughter, after all, and we know there were two eligible men, Mr. Knightley and Mr. Weston in the neighborhood. I think there’s a mystery in Miss Bates’ past. The scary thing, too, is that Mr. Knightley, in his late thirties, is considered a catch, whereas Miss Bates, who may be younger, has catapulted into middle age and hopeless spinsterhood. (Note to self: save topic of aging for another post.)

Then there’s Mr. Collins. Mr. Collins lite, played so sympathetically you almost liked him, portrayed by Tom Hollander in the 2005 Pride and Prejudice. Or David Bamber’s superlatively greasy Mr. Collins in the A&E P&P. I so identified David Bamber with his role that every time he appeared in Rome as Cicero I hoped he’d dance again…

Who are your favorite secondary characters? Who deserves their own book? Do tell!