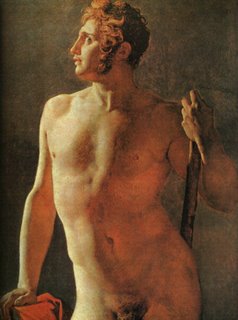 Time for another confession. The boys–Butler, Gruffudd, Firth, Bean, Northam, et al don’t do a whole lot for me. Furthermore, most men on cover art do even less. (What? And I call myself a romance novelist? Well, I did fail the trad reading challenge, and there’s also the issue of the HEA which I intend to blog about another time.) The whole topic of unwholesome romance cover art is covered elsewhere–check out the Smart Bitches–and I’m glad to see that some publishers are taking out the hero and/or heroine and moving away from the clinch cover. I mean, splutter, some of us have to read this stuff on public transport!

Back to the topic of male eye candy, partly inspired by a discussion on the Beau Monde loop, about how you’d describe your hero, e.g. Alan Rickman in Sense and Sensibility. Pam Rosenthal very sensibly suggested that the hero should be seen through the eyes of the heroine, bringing up the interesting point that the hero in chapter one might–and should–look quite different from the hero of the last chapter.

But without further ado, here is male cheesecake circa 1800, presented by Ingres. And yes, he did end the painting right there. Now, I think this guy is interesting. Quite apart from the issue of rethinking the sideburns (and, honey, that’s a fabulous highlight job–who does your hair?), he doesn’t have the overly broad shoulders, six-pack abs, and narrow waist/hips of the historical-set hero. He is, in fact, quite muscular but a bit chunky around the middle–all that vin ordinaire, I guess, considering the model is almost definitely French–and his equivalent on the other side of the Channel would attribute it to the beer (as would a modern-day Englishman). One gets the impression that once he resumes his normal posture he’d go bluh-uh-uh (happens to me all the time). He would, probably, have a great butt and legs to compensate, though, from all that walking and riding and athletic pursuits (my daughter also told me he might have a big right leg if he did a lot of fencing). Regency gentlemen might frequent Gentleman Jackson’s, but they would not find a Nautilus there, nor keep a Bowflex handcrafted by Hepplewhite in their study.

And here’s an example of a guy with great legs and the full monty as shown in a nude study of 1816–yes, he carries a big stick, a rope, sword, something, who cares, but this is not that sort of blog, thank you very much. But to me the most interesting thing (honestly) about this study is the position of his arm, strategically placed to cover the flab, something I’m quite familiar with. I also suspect he’s a working boy (no, not that sort of working boy–go wash your mouth out with soap!)–see how tanned his hands are.

I’m not the first person to be puzzled by romance’s insistence on physical perfection for the hero and frequently, in contrast, physical imperfection in the heroine. It’s fantasy, but of the “oh, come on…” sort. If a hero’s looks/build are not as important as his other qualities–loyalty, kindness, sense of humor, perhaps even literacy, then why is so much emphasis placed on his appearance? Or is romance the only place a woman can admit to appreciating a man for more than his mind? And what do you really find sexy in a man?