Recently, I read THE DREAM HUNTER by Laura Kinsale. I won’t say too much because this is not a review site, but I would say this book is “average” Laura Kinsale. Which basically means I gobbled it up. 🙂

Although the story is set in the 1830’s, there’s a Regency connection. The heroine is the fictional daughter of the real Lady Hester Stanhope and her young lover, Michael Bruce. Years ago I read a bio of Lady Hester by Joan Haslip. She was the daughter of the eccentric Earl Stanhope, niece to William Pitt and for a time his political hostess at 10 Downing Street, who shocked society with her arrogance and disregard for convention. After Pitt’s death, she “roamed the Near East, met Byron in Athens, lived with her lover in a villa in Turkey, was shipwrecked off Rhodes, and eventually settled in a ramshackle ‘palace’ in the Lebanon. Here she lived on for twenty-five years, ill, lonely and in debt, but still intriguing in the violent and complex politics of that country and famed as prophetess and ‘Queen of the Arabs’.” 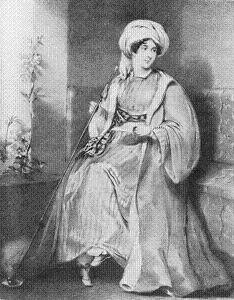 There is no conclusive evidence Lady Hester ever had a child but according to the Historical Note in THE DREAM HUNTER, there are holes in the record that indicate it was possible. Kinsale goes on to recommend some of her sources including the brief bio of Lady Hester in PASSIONATE PILGRIMS by James C. Simmons and THE NUN OF LEBANON, a collection of letters. (Of course now I want to read them both.)

The use of Lady Hester Stanhope in THE DREAM HUNTER isn’t just a bit of interesting history, though. The impact of being raised in the Middle East and by such a brilliant and fascinating but obsessed woman shapes the heroine’s character and the story conflict. I love when authors play this sort of “what if”, including persons and events from recorded history and then embroidering in the gray areas.