The Traffic of Women’s Hair 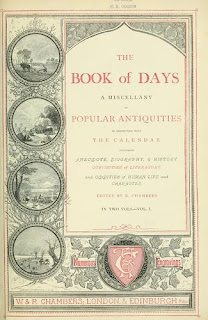 Somewhere (here, perhaps?) recently I learned of a new-to-me website, Hillman’s Hyperlinked and Searchable Chambers’ Book of Days. What a treasure this is!

The Chambers’ Book of Days, 1869 version, is organized according to calendar days and offers tidbits of history associated with those days. The tidbits might be of events or biographies, and also includes important births and deaths on the date. But it also contains some less momentous historical incidents.

As a rule, the women of England do not sell their hair. There is, however, in England, a large and regular demand for this article, to make those supposititious adornments which one sees in every hair-dresser’s window. It is stated that a hundred thousand pounds’ weight of human hair is required to supply the demand of the English market. It is mainly brought from the continent, where women of the humbler rank may be said to cherish their hair with a view to selling it for money. Light hair comes mostly from Belgium and Germany, dark from France and Italy. There is a Dutch company, the agents of which make annual visits to the towns and villages of Germany, buying the tresses of poor women.

In France the trade is mostly in the hands of agents, sent out by large firms at Paris. These agents, going chiefly to the Breton villages, take with them a supply of silks, laces, ribbons, haberdashery, and cheap jewellery, which they barter with the peasant women and girls for their tresses. Mr. Trollope, while travelling in Brittany, saw much of this singular hair-cropping going on; as the women in that province all wear close-fitting caps, the difference between the cropped and the uncropped was not so perceptible as it otherwise would have been. The general price is said to vary from about one franc to five francs for a head of hair half a pound to a pound in weight: but choice specimens occasionally command more than their weight in silver, owing to the eager competition of buyers to obtain them.

In England, something of this kind is going on in country villages, but not (it is supposed) to any great extent. A feeling of womanly pride rebels against it. Occasionally, however, evidence peeps out to show that poor Englishwomen know that there is a market for such a commodity. One instance of a ludicrous kind occurred at a metropolitan police-court some years ago.

On March 12th, 1825, the court was thronged by a number of poor women, who seemed excited and uncomfortable, and who whispered among themselves as to who should be the spokeswoman to tell the tale which all evidently desired should be told. At length one of them, with a manner half ashamed, told the magistrate that one Thomas Rushton, a barber, called at her poor abode one day, and asked politely to look at her hair. Whether she guessed his errand, is not clear: but she took off her cap at his bidding. He professed to be in raptures with the beauty of her hair, and offered her a guinea for it. Being in straitened circumstances she accepted the offer. The rogue at once took out his scissors, and cut off the whole of her hair. ‘See, your worship,’ said she, ‘what he has done.’ His worship did see, and found that there were only little stumps of hair left like pig’s bristles. The fellow put her hair in his hat, put the hat on his head, and ran off without giving her a single coin. All the other women in the court had been defrauded of their tresses in a similar way, and probably all on the same day—for the rogue could not afford to wait until the exploit got wind. The poor women declared that they had been rendered quite miserable when they came to show their husbands their cropped heads—which may well be imagined.

It may be added that, about a hundred years ago, when false hair was perhaps more in use than it is now, a woman residing in a Scotch burgh used to get a guinea from time to time for her tresses, which were of a bright golden hue.

Being someone who has been traumatized more than once by a mere bad haircut, I can well imagine how these poor woman felt. To have your hair stolen must have been a very painful thing.
In 10th grade I remember telling a hairdresser that I wanted to grow out the layers in my hair. She took that to mean I wanted to match the shortest layer and I wound up with a haircut that resembled a little dutch boy. Oh, the trauma!!!!!! I had to send my sister onto the school bus ahead of me to warn my friends not to make fun of it.
What was your worst haircut?
Posted in Regency, Research | Tagged traffic in women's hair | 7 Replies