With the deepest of apologies to Mr. St. James, today I want to talk about…unmentionables. However, as Mr. St. James probably knows, in his time there were none. Right. Another rude shock of 21st centurly life. Because–and I’m sure Mr. St. James has no idea of this, he is such a very polite gentleman–for a long time it was thought nice girls did not wear underwear; putting something on that divided the legs was a big no-no (like riding astride). But not so nice girls might for the frisson it would give their paying customers.
It always makes me hoot with laughter in a regency or regency-set when the hero removes the heroine’s non-existent undies. Particularly if he has to untie them. Good lord. The only thing he might encounter, and this would be fairly late, in the late teens I believe, would be pantelettes, when hemlines hovered at high ankle level (control yourself, sir), and gentlemen might not be terribly gentlemanly about the fact that a woman’s legs were available. And the funny thing is that pantelettes look, well, sort of rude to our eyes. Here’s a fairly polite sketch thereof from a pattern at Jessamyn’s Regency Costume Companion,
http://www.songsmyth.com/patternsunderthings.html. 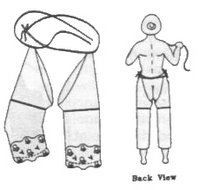 Now, I remember Elena’s readers have told her that women in regencies didn’t have sex, and doubtless that particular critic believes her heroines should be wearing (metaphorically at the very least) scary pants a la Bridget Jones. Far from it. Women had very little between themselves, the fresh air, and the fresh hero.

No wonder we love this period.

And here is the ultimate costume site with fabulous links:
http://www.costumes.org.
Enjoy,
Janet