Since I’m getting ready to travel to the NJ Romance Writers Conference today, I invited a buddy who does not quite so terrible things to Jane Austen, Sharon Lathan, to help out on today’s blog. If you’re in the NJ area, come and buy books at the Literacy Bookfair on Saturday, October 23. 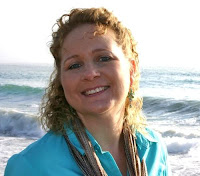 Sharon is the author of the bestselling Mr. and Mrs. Fitzwilliam Darcy: Two Shall Become One, Loving Mr. Darcy: Journeys Beyond Pemberley, and My Dearest Mr. Darcy. In addition to her writing, she works as a Registered Nurse in a Neonatal ICU. She resides with her family in Hanford, California in the sunny San Joaquin Valley. For more information, please visit her website. Sharon also shares the spotlight at Austen Authors and Casablanca Authors. In the Arms of Mr. Darcy is her latest book, available now.

If only everyone could be as happy as they are…
Darcy and Elizabeth are as much in love as ever—even more so as their relationship matures. Their passion inspires everyone around them, and as winter turns to spring, romance blossoms around them.
Confirmed bachelor Richard Fitzwilliam sets his sights on a seemingly unattainable, beautiful widow; Georgiana Darcy learns to flirt outrageously; the very flighty Kitty Bennet develops her first crush, and Caroline Bingley meets her match.
But the path of true love never does run smooth, and Elizabeth and Darcy are kept busy navigating their friends and loved ones through the inevitable separations, misunderstandings, misgivings, and lovers’ quarrels to reach their own happily ever afters…

As I am writing my saga I am constantly asking myself this question: “What did people do _____?” I love nothing more than delving into what the day-to-day might have been like for people of the upper classes during the Regency. In my latest novel, In The Arms of Mr. Darcy, I asked the above question like this: “What did people do in the winter for entertainment?” Since the initial chapters cover Christmas and a large group of Darcy friends and family descending upon Pemberley for several weeks of Derbyshire winter in 1818, it was a valid question. As I learned of the possibilities it was necessary for Pemberley to have many rooms dedicated to entertaining including one I dubbed The Court. If you were part of the holiday party, here is the fun you would have enjoyed, 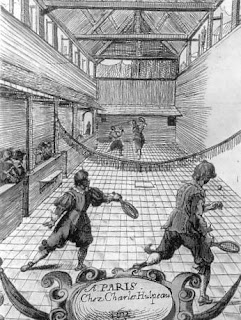 Inside amusements were plentiful. Parlor games, cards, musical concerts, darts, dominoes, backgammon, chess, and billiards are only some of the quieter pursuits possible. Tennis was strictly an indoor game until the lawn sport was invented in 1873. Primarily the sport of nobility and the gentry, tennis underwent numerous modifications since its initial creation in the twelfth century but one constant was that courts were constructed inside. The games now known as Squash and Racquets were 18th century creations, begun in debtors’ prisons as a pastime for the inmates who did not have nets so would hit the balls against the solid stonewalls. This is also the genesis for handball since a racquet was not always available.

Badminton owes its name and rules to the Duke of Beaufort and Badminton House where it was popularized in 1870. However, for many centuries before similar games involving racquets and feather-stuffed corks were played as far away as India and in ancient Greece. In England it was a very popular street game for children called “battledore and shuttlecock” with the rule a simple one of keeping the shuttlecock aloft for as long as possible.

Shuffleboard – or shoveboard, shovelboard, shovillaborde – originated in England in the mind-1500s. It began as a game for royalty played with coins shoved across a polished tabletop, but peasants and common folk rapidly took it up in pubs across England. It became so popular with the masses that people stopped going to work, causing it to be banned! Henry VIII was an avid player of the game, an interesting fact since it was he who banned the game when it came to his attention that soldiers were playing shuffleboard rather than completing their training. Not surprisingly his ban was ineffective. 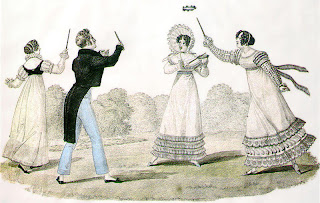 Depending on that Derbyshire weather, one could certainly brave the out-of-doors. The oldest pair of ice skates known to exist dates to 3000 BC and was made of sharpened bone with leather straps to tie to the shoes. The materials used varied over the centuries, but the style was essentially the same until 1848 when steel clamps were invented. Who first decided it was a terrific idea to slide over frozen ice is unknown, but obviously the concept was a popular one wherever water froze. The Dutch are credited with taking the sport to the next level with tournaments and carnivals hosted by the reigning monarchs as early as 1610.

Ice-skating related sports like curling and hockey existed although the rules and equipment have evolved since. The philosophy was naturally applied to sleds, the idea primarily to make smooth bottomed toboggans capable of bearing greater weight with more stability. Yes, it was a practical transportation device for peoples living in snowy places, but the delight in traveling very fast down an icy slope is as old as time.

So I think you can see that the inhabitants of Pemberley were never bored! And I didn’t even mention the Christmas fun and constant food! How about it then? Want to visit Pemberley for the holidays? If you do then I have two books for you! In the Arms of Mr. Darcy and A Darcy Christmas – both available now – cover Regency holiday traditions and wintertime fun.

Tell me about your favorite winter entertainments.