Gail Eastwood talks about the roots of Anglomania

Does the idea of afternoon tea send a little curl of delight through you? Does the sight of rolling green pastures touched by mist make you yearn to be “across the pond”? Ha, I thought as much. As Regency fans—no, make that fanatics—we are all likely to be Anglophiles at heart—at least, those of us who aren’t lucky enough to be native Brits. Our romanticized fascination with the period is part and parcel of a love for the setting we read and write about. 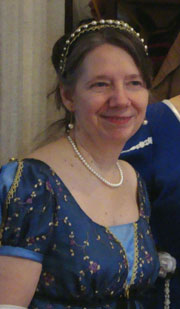 The dictionary defines “Anglophile” as “a person who admires or sympathizes with Englandand English views, policy, things, etc.” It also says “Anglomania” is “an excessive or undue attachment to, respect for, or imitation of Englishmen or English institutions and customs by a foreigner.” Uh-oh. The Regency gown hanging on the back of my office door proves I am guilty of the “imitation” part of that. Certainly I don’t agree that my respect for and attachment to things English is undue, but hmm, how does one determine “excessive”? Is it a bit eccentric that I, an American, take note of Jane Austen’s and Queen Victoria’s birthdays? I believe that value judgment is both relative and subjective….

Pondering these weighty matters led me the other day to think about where this obsession with things English comes from. Have you ever thought about it? I come from a long line of English ancestors, so I could claim “it’s in the blood”, but I know plenty of Anglophiles/Anglomaniacs who haven’t a drop of English blood and are just as addicted as I am. How about you?
If it’s not heritage, then what? I suspect it’s more than just the obvious loveliness of everything English. I’ve been addicted from a very early age –if not before consciousness, at least before memory. It must be my mother’s fault. Her tool of choice had to be the books –those lovely illustrated children’s books. Beatrix Potter comes to mind in an instant. An edition we had included a sketch of Potter’s beloved home and I loved that picture as much as Peter Rabbit. And even before A.A. Milne’s Winnie-the-Pooh, we read the poems in When We Were Very Young and Now We are Six. I can’t recite “What is the matter with Mary Jane? (She isn’t sick and she hasn’t a pain), and it’s lovely rice pudding for dinner again” without attempting a British accent. 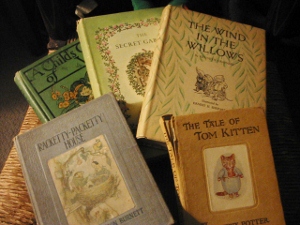 Were you raised with a vicarious diet of things English through books? Which were your favorites? The more I think about it, the more books come to mind: Peter Pan, Alice in Wonderland, The Wind in the Willows, A Child’s Garden of Verses. There’s such a rich legacy of classic children’s literature from British authors! I went through a phase of reading books about dolls—my favorites were British ones, of course. Rackety-Packety House and Impunity Jane. There had to come a point, though, when this diet fed to me became a preference of my own, and hence, a self-perpetuating addiction. Did you read The Wolves of Willoughby Hall? When did you first discover Jane Austen, or the great Georgette? Once I began to choose books because they were set in England or were about some aspect of English life or characters or history, there was no hope of a cure. And why would anyone want to be cured? This addiction has, of course, has led to a lifetime of delightful reading discoveries and pleasure, not to mention a few humble contributions from my own pen. 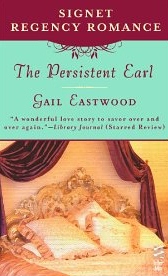 Speaking of which, I should mention that The Persistent Earl, the next of my ebook Signet Regency reissues from Penguin Intermix, is due out next week, on December 11. I do hope you’ll take a look at it, and perhaps if you have an Amazon account, you could give me some “likes”? The heroine in this story, a wary widow living in her married sister’s Londonhome and helping to nurse the hero back to health after Waterloo, also serves as a governess of sorts for her charming young nephews and niece. We could do a whole article about what books English children in the Regency were reading, or our characters read as children before that…Isn’t the power of books amazing?
I’ll give away a copy of The Persistent Earl to someone who leaves a comment (and includes their email so I can contact them). Come join the conversation! I’ll draw the winner’s name next Friday, the 14th.
Elena here.  To learn more about Gail and her writing, check out her website at www.gaileastwoodauthor.com
And next week, we’ll be celebrating Jane Austen’s birthday.  There will be prizes.  🙂
Posted in Reading, Regency | Tagged Anglomania, Anglophiles, Gail Eastwood, The Persistent Earl | 20 Replies