I’m delighted to welcome my friend, Christine Trent, to Risky Regencies. Christine is debuting in Historical Fiction, trade paperback-size, with a wonderful book about Marie Antoinette’s dollmaker, The Queen’s Doll Maker. When she first told me about this book I just knew we’d see it in print and it’s out now! 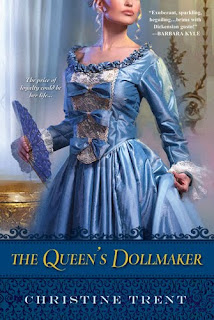 Trent’s debut follows the fortunes of an intrepid heroine who triumphs over numerous obstacles. Her portrait of the world of a dollmaker places her in Rosalind Laker’s league; she takes an unusual profession, actual historical personages, a fascinating backdrop and places her heroine in a world of wealth, fame, intrigue and danger.– Kathe Robin, RT Book Reviews

We’ll be giving away a signed copy of The Queen’s Dollmaker to one lucky commenter, selected at random.

Tell us about your book.
THE QUEEN’S DOLLMAKER is the story of a young woman falsely accused of smuggling money and jewels inside fashion dolls destined for the imprisoned Queen Marie Antoinette.

On the brink of revolution, with a tide of hate turned against the decadent royal court, France is in turmoil – as is the life of one young woman forced to leave her beloved Paris. After a fire destroys her home and family, Claudette Laurent is struggling to survive in London. But one precious gift remains: her talent for creating exquisite dolls that Marie Antoinette, the Queen of France herself, cherishes. When the Queen requests a meeting, Claudette seizes the opportunity to promote her business, and to return home…Amid the violence and unrest, Claudette befriends the Queen, who bears no resemblance to the figurehead rapidly becoming the scapegoat of the Revolution. But when Claudette herself is lured into a web of deadly political intrigue, it becomes clear that friendship with France’s most despised woman has grim consequences. Now, overshadowed by the spectre of Madame Guillotine, the Queen’s dollmaker will face the ultimate test.

We love to hear “The Call” stories. Tell us yours.
Oh my. I suppose it was really The E-mail. Except I was too naïve to understand what it was. On a Wednesday, Audrey LaFehr from Kensington Books e-mailed me in response to a full manuscript I had sent to her. She said something like, “We really like your manuscript. When can I call you to talk to you about it?”

Any halfway intelligent writer would understand that this was the equivalent of The Call. Alas, it was me receiving this e-mail. So I ended up calling my friend Delilah Marvelle, who was too kind to tell me I was an idiot, and convinced me that, indeed, I was being offered a contract for publication.

Two agonizing days passed, and then that Friday afternoon, around 5pm, I was in the Staples parking lot in the middle of the pouring rain, carrying several packages to my car. My cell phone rang, and when I saw it was from a New York area code, I had enough presence of mind to realize that it must be Audrey. So I dropped my packages onto the soaked pavement and answered. I remember very little about that call, except that Audrey told me to think it over and get back to her the following week.

We’re all about being risky here. What is risky about your book?
I decided that if I was going to get the attention of an editor, I’d have to do something different with my heroine. Yet I wanted to do something that familiar to me. I’d just finished reading a biography of Marie Antoinette and was thinking on it while doing some organizing of my doll collection, when I thought, “What if Marie Antoinette had a favorite dollmaker?” My second thought was, “Uh oh, can I even find out anything about 18th century dollmaking?” Most dolls from that era are long gone, and the antique wax, china, and composition dolls that collectors buy today date from the early 19th century.

What interesting piece of research did you discover while writing the book?
First, that dollmaking was really a man’s job, because dolls of that period were made of wood and therefore carved by carpenters. And, of course, carpenters were men. Second, I learned that in the 18th century, cheap dolls made of rags or dried fruit were what children had for play. Carved wooden dolls, dressed in fancy fabrics, were primarily used to display current fashions for the wealthy (although some became playthings). It was also fascinating to learn that Marie Antoinette really did like dolls. After she had moved to France from Austria, she would send dolls to her mother and sister as gifts. 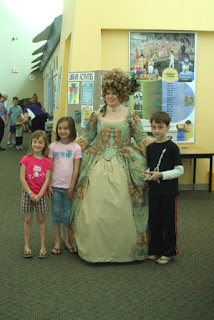 You have devised a unique way of promoting the book. Tell us about it.
I’ve done a little bit of community theatre, and I must confess to being a total ham, so I had a couple of authentic Marie Antoinette costumes made (panniers, crinoline, the works). I’m attending library events, book signings, book parties, and so on, in costume. I’ve been surprised by the fact that kids just love having their picture taken with “The Queen.”

But I was even more surprised to realize that there is a very good reason why a wealthy woman needed a lady’s maid back then: it is completely impossible to dress yourself. And the clothing is ridiculously heavy. Between the tight bindings of those weighty gowns and the extravagant, padded hairstyles, I don’t know how women of the French court remained upright!

What’s next for you?
I’ve just wrapped up a sequel, which follows the adventures of the dollmaker’s protégé, Marguerite. Marguerite goes on to become an apprentice to the great waxworker, Madame Tussaud, but her new career nearly melts down when the English Crown embroils her in a dangerous scheme against Napoleon. I’m still waiting for final word on the book’s title, but it is scheduled for release in early 2011.

Does anyone still have a favorite doll from childhood? Or the memory of a doll you loved? I’d love to hear about it!

(Remember to leave a comment for a chance to win a signed copy of The Queen’s Dollmaker.)
Posted in Uncategorized | Tagged Call story, Christine Trent, Marie Antoinette, The Queen's Dollmaker | 51 Replies