Christine Trent and A Royal Likeness

Welcome back my friend Christine Trent with her second release, A ROYAL LIKENESS, the sequel to her terrific historical debut, THE QUEEN’S DOLLMAKER. 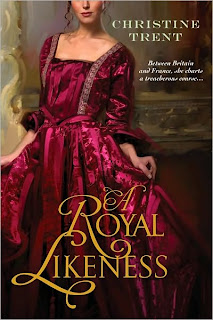 “Trent allows readers into a crafts-women’s life to see women at work in a man’s world triumphing to find love and fame, meanwhile interjecting actual personages and historical facts into the story. It’s a great way to learn history.”–RT Book Reviews

“The detail in this story is so mesmerizing both with the wax figures and the battles. I would recommend this book to anyone who loves a thrill-seeking adventure with a damsel in distress sort of feel. I can’t wait to see what Christine has in store for us next!”–All Things Historical

Christine will give away a signed copy of A ROYAL LIKENESS to one lucky commenter chosen at random.

Welcome back to Risky Regencies, Christine. Tell us about A ROYAL LIKENESS.
I’m very excited about this sequel to THE QUEEN’S DOLLMAKER. In the first novel, we leave off with Marguerite Ashby as the heir apparent to the famous Laurent Fashion Dolls business. But when Marguerite’s husband is killed during a riot, the young widow travels to Edinburgh and becomes apprentice to her old friend, Marie Tussaud, who has established a wax exhibition. When Prime Minister William Pitt commissions a

wax figure of Admiral Nelson, Marguerite becomes immersed in a dangerous adventure – and earns the admiration of two very different men. And as Britain battles to overthrow Napoleon, Marguerite will find her loyalties under fire from all sides.

How easy (or difficult) was it to fit Marguerite’s story to the real historical events?
What made this novel pure joy to write was the way historical events fit so seamlessly into my story. Madame Tussaud started her travels in England in 1802, just three years before Napoleon’s humiliating defeat at Trafalgar, so it was easy to trace Marguerite’s adventures from Tussaud’s arrival on English shores, to Trafalgar, to the continuing intrigues with and against the French and Spanish governments. 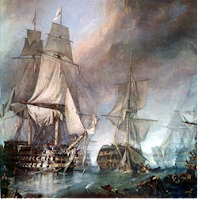 What is risky about this book?
I took a risk in A ROYAL LIKENESS by incorporating a great naval battle, Trafalgar, in a way that, I believe, is appealing for the female romantic historical fiction reader. So, of course, although there are cannons exploding, crude surgery being performed, and the stench and filth that accompany every battle, the heroine manages to find romance in the middle of it all!

Did you come across any interesting research while writing this book?
Did I ever! I could have written volumes on the history of waxworking: how wax figures were already being made in ancient times, the success women enjoyed in this field, and how a waxworks exhibition was much like yesterday’s People© magazine. That research led into many other sorts of “sideshow attractions” of the time, such as geggy performances and Phantasmagorias, none of which I knew about before, but which all of you can read about in A ROYAL LIKENESS.

What is next for you?
My next book, tentatively titled THE PRINCE’S PAVILION, about a cloth merchant named Annabelle Stirling, should be released in early 2012. Thanks to her patron and great architect, John Nash, Belle Stirling is a rising star in the homes of London’s fashionable elite. Even the prince regent wants her elegant, high quality fabrics used in the decoration of his new palace, Brighton Pavilion. But when those closest to her conspire against Parliament, she risks losing her reputation, her business. . .and even her life.

I hope readers will be as fascinated as I was by details of early 19th century cloth manufacture, the Luddite riots, and other conspiracies of Regency England.

My fourth novel will be encompass another unusual profession, this time a dark and mysterious one set in Victorian England. And that’s all the detail I’m giving for now!

Your pink teddy bear brought you luck, Azteclady!
You are the winner of a signed copy of Christine Trent’s The Queen’s Dollmaker.

Email us your snail mail address at riskies@yahoo.com