A big thank you to the Riskies for letting me step in as a temporary contributor to their blog! For my debut, I’m showering you with confetti, for today is the last day of carnival, the “fifth season,” here in Germany. “Carnival in Germany???” some of you might say. “Do Germans have a sense of humor?” If you fall into this group, you have to be very brave now because what I’m going to show you will shock you exceedingly.

There will be a lot of confetti. 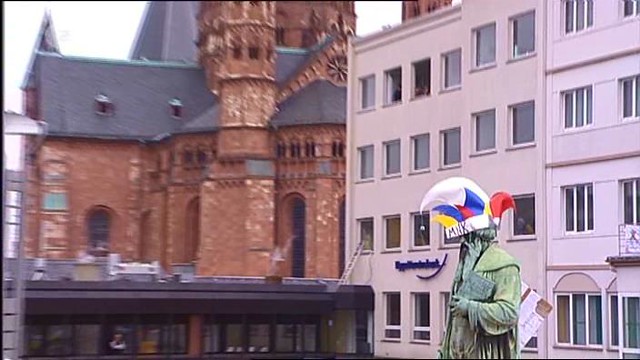 Since the Middle Ages the weeks before Ash Wednesday, the start of lent in the Catholic calendar, have been used for celebrations and fool’s days during which the traditional social order was turned upside down. The instutions and rituals of the Church were parodied in “ass masses” and the choosing of a “pseudo-pope”.

In many German areas these carnival customs were lost after the Reformation since the Protestant church got rid of the days of lent before Easter. In Catholic areas, however, carnival continued to be celebrated. In the towns the festivities were organized by the guilds, while the nobility gave masked balls in their palaces and estates. Carnival masks and costumes became more and more intricate and elaborated and were influenced by the Italian commedia dell’ arte.

The modern forms of carnival can be traced back to the years of political restoration in Germany during the early nineteenth century. Modern carnival emerged as a middle-class effort with strong elements of political and military satire. This satirical tradition lives on most strongly in the Rhenish Carnival, which is celebrated particularly in the areas around Mainz, Cologne, and Düsseldorf, the three strongholds of this type of carnival. It is characterised by parades and sessions (“Sitzungen”), which are show events combining song, dance, and comical speeches. The largest of the parades traditionally take place on Rose Monday, the Monday before Ash Wednesday.

In Mainz, the first carnival parade was organised in 1837 by local merchant Nicolaus Krieger, who thought this might be a good way to transform the “vulgar” customs of the common people into something more genteel and something that would attract tourists. (Good thinking, Nick! These days thousands of people not only take part in the Rose Monday parade, but several hundred thousands of people also line the streets.) 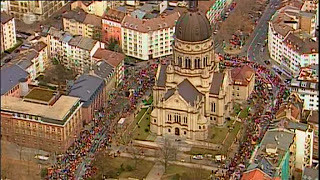 In the same year, in 1837, another merchant, Johann Kertell, founded the first of the Mainzer guards, the Ranzengarde (= the Fat-Belly Guards). The guards are the most obvious example of military satire in the Rhenish Carnival, for their costumes are modelled on uniforms of real regiments stationed in the area during the nineteenth century. 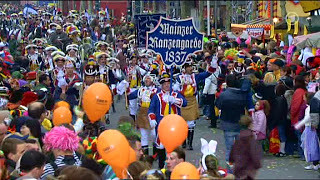 In the context of the Rhenish carnival, the guards are responsible for protecting Prince Carnival and for escorting the eleven members of the fool’s committee that oversees the carnival sessions. Just like many real military regiments, the carnival regiments have musical bands, and in Mainz they also have a special carnival march, the Narhalla March, a musical parody of a march composed by Adolphe Adam for his opera Le Brasseur de Preston in 1838. Motifs from that opera were used by one of the founding members of the first carnival club in Mainz, the Mainzer Carneval-Verein (MCV), for a carnival march that was first performed in 1840.

(In this video you can listen to the march at the beginning of the Mainzer TV session of 1985, where it was played when members of all the guards of Mainz escorted the fool’s committee to the session)

I leave you with one last image from the Rose Monday parade – these are the Meenzer Schwellköpp (the swell heads) – and return to my current WIP (also known as Aaaaaaaargh!!!!! or sob), which I need to finish before carnival will be buried tomorrow. Wish me luck! 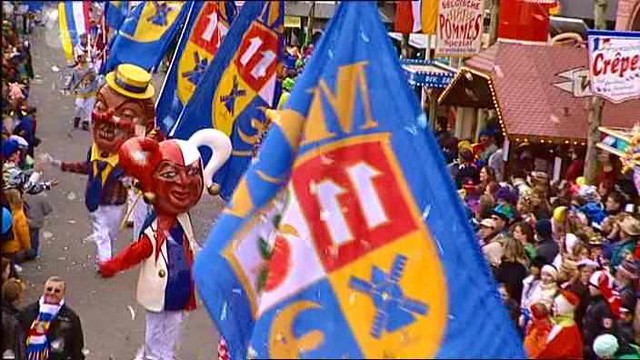 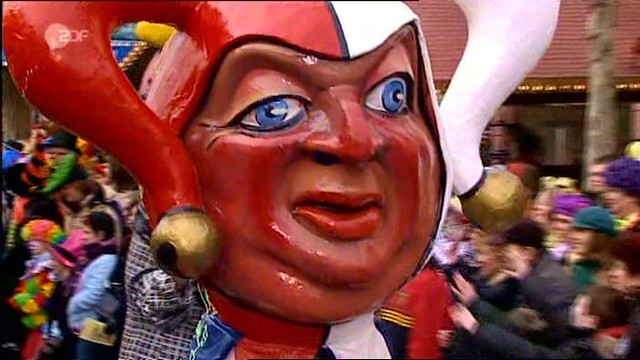