Game on! What Risky Book Commands The Highest Price On Ebay?

I even devised rules for the game.

1. Book must be a paperback
2. It must be Historical (leaving out some Jewel and Mullany books)
3. No novellas or double books
4. No special releases (leaving out a bunch of McCabe and Gaston books)
5. Written under our “Risky” names (No Diane Perkins books – Amanda sneaks in with her Laurel McKee because it is on the Risky site)
6. Book must mail from the US, because the UK and AU books (McCabe, Mullany, Gaston) are more costly by virtue of being far away.
7. Book must not sell directly from Barnes and Noble on ebay as Janet’s and Carolyn’s books do. That’s just wrong.

Here are the results in no special order except the winner comes last.

Poor Susanna did not make it to the gate, but, in her case, this is a good thing. Because her books are ebook only, if they appeared on ebay they’d likely be pirated versions, so we are glad she is not running this race. We will, however, put up the cover of her latest book, A Dream Defiant, out now!!

Gail has a very respectable offering in An Unlikely Hero (1996) which has a Buy It Now price of $7.99

Megan’s 2005 Regency, A Singular Lady, slips back in the pack with a $5.98 price tag, but if you don’t have this delightful book, you might want to snap it up. This is the only copy for sale on ebay.

Amanda just squeaked past Megan with A Notorious Woman (2007), one of her early Harlequin Historicals, set in romantic Venice, for sale at $6.99, not enough to catch up to Gail and way behind herself/Laurel and Elena.

A surprising surge for my Valiant Soldier, Beautiful Lady (2011), passing Elena and Megan at $7.86. Why this book? Why not one of the older, harder to find ones? I am so close to Gail, by the way, I could just reach over and knock her off her…..never mind!!!

Wait a minute!! Carolyn just streaked past me with Not Wicked Enough (2012) at $9.75. She’s pumping her legs hard to catch up to Elena. The race is getting exciting!

Elena’a struggling, too, though, to catch up to the leader. One of us is way ahead!

The first place winner is Janet! Her Jane and the Damned (2010) is crossing the finish line at a speed–I mean–cost of $13.88. That passes even the Laurels in this group.

Personally, I think vampires should be excluded (well, I think that now. In fact, I just thought of it this second)

Which reminds me, I never thought of a prize….I think the prize should be the satisfaction of a race well-run. What do you think? What should the prize of this competition be?????

What happens when you search Ebay

…using Regency as a search term.

First, not so much of the real stuff as you’d expect. Quite a few books and some furniture. But also some strange things. Did you know there was a design style called Hollywood Regency? There seems to be a lot of it up for sale, and no wonder. 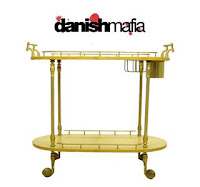 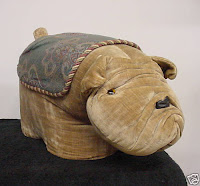 This one is even more bizarre.

DOG FOOTSTOOL or OTTOMAN. Just found stored away at a Ca. estate. Not sure what kind of dog he is supposed to be.. possibly a Bulldog? Very nice and clean. Looks like he spent most of the time stored away

Frankly if I owned this I’d keep it stored safely away too.

How about this little monstrosity?

Vintage Mother of Pearl Regency Glam Poodle Pin Brooch. This little guy has got the look! He is studded by nine high sheen thick cicular Mother of Pearl disks. On his head and tail he has a brushed pink enameling with black tips on his paws. The puppy has a single green glass faceted eye with a cute as can be pose.

I’m not convinced it’s a poodle. Those are hooves. And it’s one-eyed. I think it’s a cyclops. 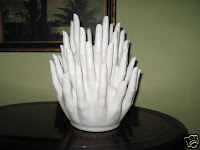 This too is a Hollywood Regency piece that would give me the creeps if I owned it.

This is a hand cast piece…..pottery/plaster over resin……….and each and every finger/thumb look very realistic! This is new, never used, no damage anywhere….there is felt on the bottom to protect your furniture. A truly magnificent piece……sure to please! Don’t miss out…….you won’t see another one soon!

Just to cleanse the aesthetic palate, however, here’s a pic of the rug I’ve just bought on eBay for my office. Isn’t it pretty? Ridiculously cheap, too.

Have you had any good eBay experiences recently?