Heh.  I am filling in for Janet today. Late, but hey. It’s still daylight here on the Left Coast.

In the comments, please, list your favorite historical romances.  Up to, say, three. The ones where, if you were to be thrown into a dungeon (assume a source of light) you would not mind reading over and over in between taking breaks to tunnel your way out.

I would like to know if I’ve missed any great ones.

Thank you. I will tally the results later next week. 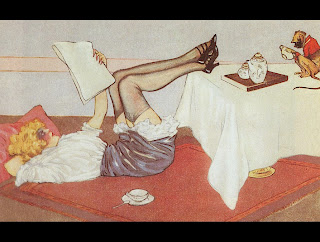 I found it quite hard to pick my favorite posts–as I browsed through the last year I’d find something, congratulate myself on how clever I was, and find another Risky had written it!

We had a promotion (and another contest, long since won and gone) a year ago, when we all blogged about Pride & Prejudice, celebrating the tenth anniversary of the release of the Firth/Ehle version. I remember wailing to the other Riskies that I was running out of ideas–one of the disadvantages of posting later in the week, of course (Megan and Amanda didn’t complain nearly as much as I did, though). I eventually hit on the idea of Who gets the happiest HEA? in which I imagined what would happen to the various couples, not just Lizzie and Darcy, after the book ends–and you all had some very creative responses.

A lot of our posts here are research-related and here’s one from December 2006–Heavenly Voices, about the fashion for castrato singers in the eighteenth- and nineteenth- centuries, and absolutely nothing to do with Christmas. There’s a link to a video of mezzo-soprano Vivica Genaux singing some of the extremely demanding and virtuosic music written for the great Farinelli and a youtube clip from the movie Farinelli. We also like to celebrate anniversaries, and I wrote about the abolitionists for the 200th anniversary (more or less) of the Slave Trade Act of March 25, 1807 in Men and Brothers–a post dear to my heart since Jane Lockwood‘s book Forbidden Shores, in stores October 2, is about abolitionists (and sex).

I also like to write about new book discoveries–I enjoyed Ian Kelly’s biograpy of the first superstar chef Antonin Careme, Cooking for Kings, which led to a discussion of food, recipes, and cooking experiments. And I blogged about Dickens’ Our Mutual Friend, a re-read for me, because I love to talk about Dickens and apparently so do a lot of other people.

And here are a couple of posts in which I let rip, sort of. If in doubt, make them laugh, so I concocted a quiz about what type of hero you are. And my final favorite in which I whine and complain and quote Orwell and D. H. Lawrence and get on my usual hobby-horses–if you’ve met me you’ll have heard all of this before–Cliches and the English Language.

So come chat or vote, and you could win a signed copy of Dedication and The Rules of Gentility.

Don’t forget our great big super contest, in which a lucky winner will receive a $25 Amazon gift certificate. All you have to do to enter is sign up for the Riskies’ newsletter by sending an email to riskies@yahoo.com with NEWSLETTER in the subject line, and if you’re signed up already, you don’t have to do anything but wait. Good luck!