On this day in 1814, a Bourbon King of France returned to the throne after the tumultuous period in history that included the French Revolution, Napoleon’s Empire, and the Napoleonic wars.

After Louis XVI of the House of Bourbon was overthrown and executed during the French Revolution, Napoleon rose to power in France, ultimately declaring himself emperor and, conquering most of Europe. In 1809, however, Wellington arrived in Portugal and by 1813 marched his British, Portugese and Spanish armies on to drive the French out of the Iberian peninsula. By April 1814, France fell as well.

In France, Napoleon’s former foreign minister, that old survivor, Talleyrand, convinced the Allied powers to restore the Bourbons to the throne. Other options, each with their own supporters, were considered–Napoleon’s son (through a regency), Louis Phillippe  son of the guillotined duc d’Orleans, the King of Sweden, or even Napoleon himself if he agreed to return France to its 1792 borders (Napoleon refused). The war-weary French populous were in support of a return of the Bourbon kings, however, so the decision was made.

The new monarchy was a constitutional one and many of the Napoleonic reforms were maintained, but Louis XVIII fairly quickly became unpopular when he pressured for the return of lands to the original aristocratic owners or the Catholic Church. He also abolished the tricorn flag and insisted on marking the days that Louis XVII and Marie Antoinette were executed.

Ironically, May 4, 1814, was also the day Napoleon arrived at his first exile, the island of Elba, from where he escaped the following February to begin his Hundred Days– and sending Louis XVIII fleeing again.

The Bourbons reigned until the popular uprisings of the July Revolution of 1830 finally placed Louis Phillippe, son of the guillotined duc d’Orleans, on the throne. He was originally beloved as the “Citizen King” but he became increasingly unpopular when, under his rule, the conditions of the working classes deteriorated, and the gap between the rich and poor became wider. He was the last king to rule France.

That ends your French history lesson for today. Any questions? Comments?

We’re on a historical road to Waterloo (the 200th anniversary) and this was one step along the way!

If you were a lady of Napoleon’s court…

Of the many museums I visited in Paris this summer, some famous, others obscure, I particularly enjoyed the morning I spent at the Carnavalet Museum of the History of Paris. At the time they were hosting an exhibit on Napoleon’s Paris, and I thought of my fellow Riskies and our readers when I saw these dresses and accessories worn or carried by the ladies of the imperial court: 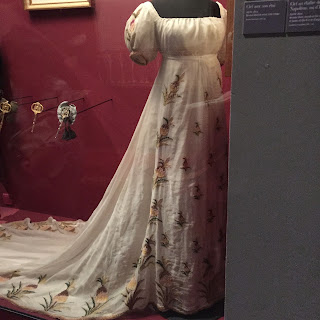 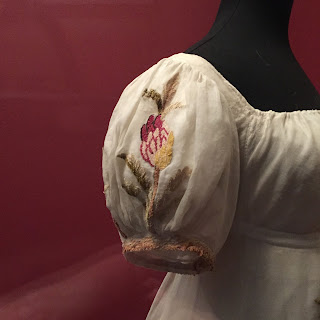 Such a deceptively simple dress, but can you imagine the hours of work that went into that embroidery?

This train is sheer grandeur: 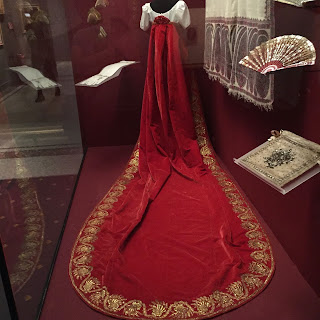 And can you imagine flirting behind a fan like this? 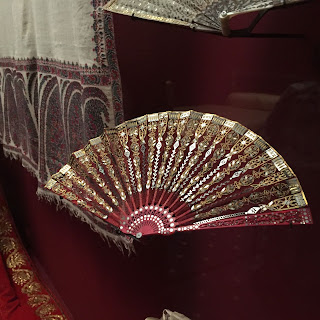 This comb must have sparkled in its day: 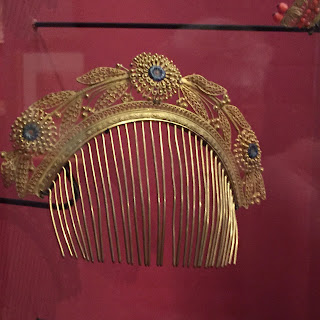 I hope you’ve enjoyed this image-heavy post, and that your autumn is getting off to a great start! I promise to bring more actual text next month, when I won’t be scrambling because my daughter is starting 6th grade over a week behind schedule after a teacher strike.