This post was originally posted on the now-defunct Romancing the Past blog back in 2011, but on re-reading it I decided it was timely enough (for Risky Regencies values of timeliness) to bear recycling!

It has occurred to me that, should I happen to meet certain historical figures in the afterlife, our conversations might prove a bit awkward.

It’s the TMI factor, you see. What do you say to a man when you’ve seen the love letters he sent to his wife in the early days of their marriage? Letters which contain such revealing passages as:

“Come soon; I warn you, if you delay, you will find me ill. Fatigue and your absence are too much. You are coming, aren’t you? You are going to be here beside me, in my arms, on my breast, on my mouth? Take wing and come, come! A kiss on your heart, and one much lower down, much lower!”

Well, all right, then. Good to know this guy–we’ll call him General X–could be so generous and amorous when his passions were engaged.

And then there’s General Y. A more circumspect soul, he left us no correspondence allowing us to deduce just what he planned to do to his woman of the moment next time he got her into bed. And when one of his brothers was being a bit too scandalous in his womanizing, General Y complained in a letter to another brother that he wished their errant sibling was “castrated, or that he would like other people attend to his business & perform too. It is lamentable to see Talents & character & advantages such as he possesses thrown away upon Whoring.”

Though don’t let that fool you into thinking General Y was any kind of model of chastity. Among other things, he had at least two mistresses in common with General X, one of whom was generous enough to the salacious curiosity of posterity to publicly state that Y was better in bed. And who are our amorous generals? X is Napoleon and Y is Wellington–and speaking as someone who’s read stacks of biographies of both, it’s amazing how much of their personalities and voices come through in those two brief quotes above. 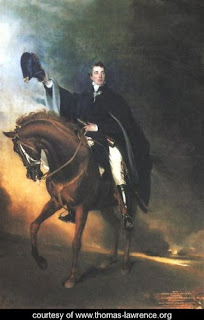 Do you know any good historical TMI? And would you prefer Napoleon or Wellington as a lover? (I’m on Team Wellington all the way–he’s much better-looking by my tastes, I like cool-headed, reserved, snarky personalities like his, and on the whole I prefer my Secret Historical Boyfriends to NOT try to take over the world. Though, really, if I were going to have my pick of ANY military man of the era, I’d have to consider Michel Ney and Eugene de Beauharnais too.)