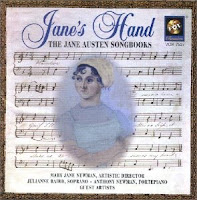 I recently went on an online shopping spree with a gift certificate that included buying things I had not received for Christmas and, as is the way, things I didn’t know I wanted until I found them. Last night, while I was wondering what I’d blog about, I listened for the first time to this CD of soprano Julianne Baird and other artists singing music from Austen’s collection. Because sheet music was so expensive (we know she paid six shillings for a book of piano music), many of the pieces were copied by hand from music Austen borrowed from friends or circulating libraries. Her music books include instructions for playing or singing, and in one song, replaced the word soldier with that of sailor, reflecting her loyalty to the Royal Navy.

Baird has a wonderful intimacy to her delivery and the collection of music is extraordinary, including opera arias by Handel and Gluck, songs by Stephen Storace the London theater impresario, and a song arranged by Georgiana, Duchess of Devonshire to words by Sheridan. This isn’t the only collection from Austen’s music books–I was tempted by one recorded in Chawton Cottage, but according to one review, the sound quality is poor.

As we all know, music was an important part of a Regency lady’s life. Here are some instructions on drawing room performance from an 1813 fashion and how-to book for gentlewomen, Mirror of the Graces:

What has been said in behalf of simple and appropriate dancing, may also be whispered in the ear of the fair practitioner in music; and, by analogy, she may not unbeneficially, apply the suggestions to her own case.

There are many young women, who, when they sit down to the piano or the harp, or to sing, twist themselves into so many contort lions, and writhe their bodies and faces about into such actions and grimaces, as would almost incline one to believe that they are suffering under the torture of the toothach or the gout. Their bosoms heave, their shoulders sill-up, their heads swing to the right and left, their lips quiver, their eyes roll; they sigh, they pant, they seem ready to expire ! And what is all this about? They are merely playing a favourite concerto, or singing a new Italian song.

If it were possible for these conceit-intoxicated warblers, these languishing dolls, to guesa what rational spectators say of their follies they would be ready to break their instruments and be dumb forever. What they call expression in singing, at the rate they would show it, is only fit to be exhibited on the stage, when the character of the song intends to portray the utmost ecstacy of passion to a sighing swain. In short, such an echo to the words and music of a love ditty is very improper in any young woman who would wish to be thought as pure in heart as in person. If amatory addresses are to be sung, let the expression be in the voice and the composition of the air, not in the; looks and gestures of the lady singer. The utmost that she ought to allow herself to do, when thus breathing out the accents of love, is to wear a serious, tender countenance. More than this is bad, and may produce reflections in the minds of the hearers very inimical to the reputation of the fair warbler.

This is the piano in Chawton Cottage which probably wasn’t Austen’s. We do know that it’s a Clementi (the composer, in residence in London, had a piano and print music business) from the first decade of the nineteenth century. 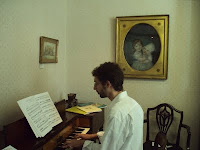 Occasionally musician visitors are allowed to play it. It’s a square piano, the instrument that became affordable to the middle classes and invited a whole slew of women to simulate orgasms in public. Which brings me to my next self-inflicted gift, Mr. Langshaw’s Square Piano: The Story of the First Pianos and how they caused a Cultural Revolution by Madeline Goold. I started reading this last night, and it’s a wonderful account of how Ms. Goold bought a square piano, had it restored, and researched the history of the instrument. It was made by the Broadwood Company, which made pianos well into the 20th century, and whose records are still in existence. You can read more about the book, the restoration process and hear soundbites at mrlangshawssquarepiano.co.uk.

What Broadwood did was to produce a piano that was compact and affordable, with a base price of 24 guineas, that were shipped all over England and worldwide. When Lady Catherine de Bourgh invites Elizabeth to practice at Rosings, she refers her to the square piano in the housekeeper’s room, not the grand piano in the drawing room. Jane Fairfax’s piano is a square piano, according to Ms. Goold (aha! yet another excuse to re-read Emma) a dead giveaway that it was a gift from someone who knew the dimensions of the Bates’ parlor and not Colonel Campbell. Knightley still complains that it’s too big, though, which gives us a good impression of how low the Bates family had sunk.

Do you play the piano or would you like to learn? What sort of music do you like to listen to, if any, while you read or write?

And in other news, Improper Relations (February 2010) has its first review at Beyond Her Book:

What I continue to love about Janet Mullany’s books is how she manages to convincingly tell her story in first person from both her hero and her heroine’s perspective. The first person narrative gives an extremely refreshing take on the insanity which populates the plot; from the way her heroine observes the foibles of her own family, to the slowly beautiful dance it takes the hero to discover he’s in love. I can’t wait to see where she goes next.