May 5 was the 200th anniversary of the death of Napoleon Bonaparte. He died on St. Helena, a remote island in the Atlantic off the west coast of Africa. Once the resident of the opulent Tuileries Palace, Napoleon ended his days in Longwood House, a damp, windswept house on St. Helena.

In my books, Napoleon is usually depicted as a megalomaniac tyrant who thought his military genius was superior to the Duke of Wellington (How could he?). He was certainly that, but this week, I must also acknowledge that Napoleon did achieve monumental things.

The Napoleonic Code was certainly the greatest of these achievements. His rule rewrote and revised civil law into a clearly written, accessible form that has strongly influenced laws of other European countries, as well as other countries around the world. The code established equality for all (male) citizens. For the first time since classical antiquity, the code decriminalized same sex sexual activity, as well as other private acts between individuals, like blasphemy, witchcraft, heresy, sodomy.

Napoleon also created a national bank, cut taxes, reformed education, and guaranteed freedom of religion, even for the Jews, ending restrictions imposed on them. He supported the arts and the sciences.

There is no doubt that Napoleon in his prime was a man of great genius, as well as high energy, confidence and ambition. Unfortunately his thirst for power overcame good judgement. Had his army not met Wellington’s in Spain, had he not invaded Russia, had he not underestimated Wellington and the Allies at Waterloo who knows what other great things he might have done?

What do you think? Do Napoleon’s accomplishments outweigh his thirst for power? How should we be remembering him 200 years later?

And now for an amusing change of subject, but still about Napoleon, take a peek at this video.

Over the Easter weekend, I visited the Cleveland Museum of Art with my youngest daughter and a dear high school friend. Although I grew up in Cleveland, I haven’t been to the museum in years, so it was fun to tour the galleries and have lunch at the Café. Their Tandoor Grill has nice curries, Naan bread and chutneys. Mmmm….

Here are a few items of Regency interest.

The first item is in the Armor Court, an impressive collection of armor and weapons. Most of the collection is earlier than our period of course, but this “double-barrelled flintlock sporting gun” was made in 1809 for Napoleon Bonaparte. It was made by Jean Le Page, member of a family firm who supplied firearms to the French nobility. The description says such “deluxe” weapons were often made for display and as gifts and in this case, Napoleon did give this gun to a Polish count. Read more about Napoleon’s gun and check out the Cleveland in HDR blog for a closeup that shows more detail of the gorgeous workmanship.

I picked up postcards of the next two items. Although photography without flash was permitted, I didn’t want to risk the flash going off accidentally (I am clumsy) and often the pictures in the postcards are better anyway.

Here’s one of my favorite Regency portraits, what my daughter likes to call “historical selfies”. It’s a portrait of Charlotte and Sarah Carteret-Hardy, by Sir Thomas Lawrence, 1801. Sarah was married the same year, Charlotte a few years later. The contrasting personalities of the two remind me of my own daughters—one more dreamy and introspective, the other more lively and outgoing. And of course the clothes are lovely. Here’s the link for more information on the Hardy sisters portrait.

And lastly, I was charmed by a series, “Apollo and the Muses” by the French painter Charles Meynier in 1800. They include Polyhymnia, Muse of Eloquence; Erato, Muse of Lyrical Poetry; Apollo, God of Light, Eloquence, Poetry and the Fine Arts with Urania, Muse of Astronomy; Calliope, Muse of Epic Poetry; and Clio, Muse of History. The one I’m showing here is Erato.

Here’s a fascinating article on the restoration process. Restoring the Erato painting was particularly challenging, since another artist had over-painted Cupid’s body with a “prudish white veil” an estimated 75 years after Meynier completed the painting. Those Victorians! Fortunately, it was possible to remove the veil and restore the painting to its original beauty.

On the CMA website, you can also see the individual paintings in the Apollo and the Muses series.

Have any of you visited the Cleveland Museum of Art? (I highly recommend it.) Do you enjoy stories of restored treasures?

Able was I ere I saw Elba 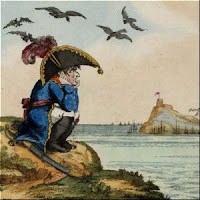 On this day in 1814, the Treaty of Fontainebleu deposed Napoleon and sent him into exile to the island of Elba. He escaped just under a year later, set sail for France, and in one of those unexpected twists of history, returned to power. No one’s quite sure how he managed to escape, but Napoleon was a man of great energy and industry, and although contemporary cartoons depict him as a disconsolate exile on a rocky island, that was artistic license. 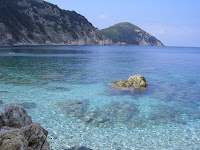 Now one of the many differences between the rest of us and the Corsican Monster is that if we were living in a castle in this sort of scenery, we’d grit our teeth and stay put. But not Napoleon. Apart from plotting his escape, he was quite busy as Emperor of Elba, carrying out social and economic reforms. He had a personal escort of 1,000 men, a household staff, and 110,000 subjects. 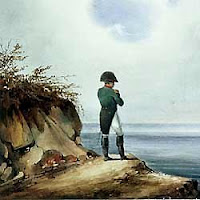 But it was a time of great misery for Napoleon, the man who’d once had almost all of Europe at his feet. The Treaty of Fontainbleu also sent his wife and son to Vienna. Napoleon was so distraught he attempted to commit suicide with a vial of poison he carried, but the poison was old and only made him sick. Shortly after his arrival, he learned of the death of the former Empress Josephine.

It’s possible his English guardians on the island aided, or at least turned a blind eye to, Napoleon’s escape plans. The restored French monarchy was proving unsatisfactory, which meant that once again the balance of power in Europe was threatened. This is discussed in this fascinating article, A Sympathetic Ear: Napoleon, Elba, and the British, which also explores the phenomenon of Napoleon as tourist trap.

British seamen proved to be keen visitors. Indeed, Napoleon had embarked for Elba on April 28th, aboard the frigate HMS Undaunted, whose captain, Thomas Ussher, wrote home on May 1st: ‘It has fallen to my extraordinary lot to be the gaolor of the instrument of the misery Europe has so long endured’. By the end of the month, the man whom Ussher could not even bring himself to name had become his ‘bon ami’, and had given him 2,000 bottles of wine, and a diamond encrusted snuffbox. In return Ussher presented Napoleon with a barge, which he flatteringly reserved for his own exclusive use.

Napoleon landed in Cannes on March 1, 1815 and declared:

I am the sovereign of the Island of Elba, and have come with six hundred men to attack the King of France and his six hundred thousand soldiers. I shall conquer this kingdom.

As he progressed through France, soldiers sent to attack him instead joined him, so that he made a triumphant return into Paris on March 20. There’s a great first-hand account of his arrival here.

So, if you’d gone to visit Napoleon on Elba with the expectation that he’d probably give you lots of wine and a diamond-encrusted snuffbox, what would you take him as a gift?

Now onto shameless self-promotion. If you’re in Maryland, I’m going to be signing tomorrow at the Catonsville Historical Society, 7 – 9 pm in the company of some excellent authors. Looks like there will be some wine too!