When I started writing my October historical release, Indiscreet, I didn’t intend for the story to be set anywhere but in England. But my heroine, Sabine, had been so terribly wronged, she and her uncle (and guardian) had to leave the country. Well. Where would they go? Europe smack in the middle of the Napoleonic wars would be a bit dicey.

For some reason my brain brought up the Ottoman Empire, as mentioned in previous posts here. Syria happened to be a province at the time and Aleppo, one of its most famous cities, had a crucial location and role in the period. This city was a main stop for caravans going to the Orient or back toward the port city of Iskenderun. But Aleppo (Haleb, as it is more accurately spelled today) isn’t the only fascinating place in Syria.

The Roman city of Serjilla is one place I’d love to visit. 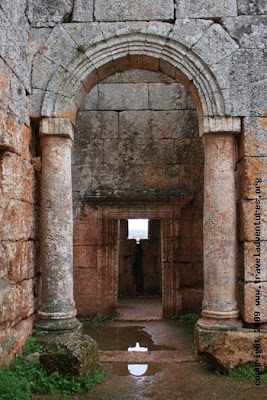 Then there’s the castle of Bagras, of which Wikipedia has this to say:

Bagras or Baghras is the name of a town and nearby castle in present-day Turkey, in the Amanus Mountains.

The castle, properly known as Gastun (or Gaston, Guascon, Gastim) provided a base for a force to cover the Syrian Gates, the passes between İskenderun and Antioch. It was built in two levels around a knoll, the fortification resembling Armenian work, and with water supplied by aqueducts.[1]

It was built about 1153 by the Knights Templars[1] and held by them or by the Principality of Antioch until it was forced to capitulate to Saladin on 26 August 1189. It was retaken in 1191 by the Armenians (under Leo II),[1] and their possession of it became a major point of contention between them and the Antiochenes and Templars. 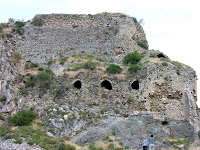 After much negotiation, it was finally returned to the Templars in 1216. According to the Armenian chronicles, it withstood a siege by the forces of Aleppo at about this time.[2] After the fall of Antioch to Baibars in 1268, the garrison lost heart, and one of the brothers deserted and presented the keys of the castle to him. The remaining defenders decided to destroy what they could and surrender the castle. Despite the loss of the castle, Hethum II of Armenia and Leo IV of Armenia soundly defeated a Mamluk raiding force in the nearby pass in 1305.

In America, we tend to think of England has having some real but the UK has nothing on a country like Syria (Some very interesting information at that link). And with vistas like this: 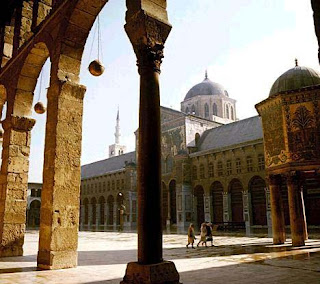 There’s also the water wheels in the Syrian city of Hama. 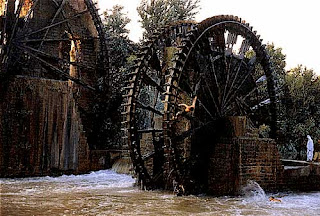 When Syria talks about history, don’t be surprised if they’re talking about the Iron Age. Here’s a great link to a website that had pictures of traditional costumes You probably won’t be surprised if I tell that I wasn’t very far into my research before I wanted to visit Syria.