I am just finishing up the fourth book in my Scandalous Summerfields series today, Lorene’s story. As befitting the title of the series, scandal plays and important role. Lorene has an abhorrence of scandal, but it does seem to follow her wherever she goes.

The was not the first time I’ve written about scandal so today I’m reprising a blog I wrote on the subject in 2008. Scandalizing the Ton, one of my books that came out that year, was what I called my “Regency Paparazzi” story. It was inspired by our present day obsession with celebrities, but we didn’t invent an interest in the rich and famous. Nor did we invent a press willing to do almost anything for some good gossip about them.

The eighteenth and nineteenth centuries abounded with newspapers. Some of them even reported important news, like what was happening in Parliament, social issues, important events. It was during this period that some of journalism’s standards and ethics were beginning to be established, things like not revealing sources, acting as society’s social conscience, which was not always a good idea.

James Leigh Hunt and his brother, John, published serious news in their London newspaper, The Examiner, including calling the government to task for the heavy taxes levied on the people. In 1812, they printed an article criticizing the Prince Regent for his gambling and womanizing and running up huge debts while not doing anything to better the lives of the citizenry. Although what they printed was true, the Hunts were sued for libel and imprisoned for two years. Leigh Hunt continued to edit The Examiner from his prison cell.

In contrast to the responsible and ethical journalism of the Hunts were the newspapers that flourished by reporting the scandals and peccadilloes of the wealthy, the political elite, and the aristocracy. In his wonderful book, Scandal: A Scurrilous History of Gossip, Roger Wilkes gives examples of the eighteenth and nineteenth century love of gossip, and how the newspaper reporters purchased the juicy tidbits from loose-lipped servants and gentlemen and ladies willing to expose their friends. Not only did newspapers purchase gossip, they also blackmailed their potential victims, taking money to not print some embarrassing incident.

They also just made up stories. In Punch Thackeray and his colleague Jerrod parodied that sort of newspaper with their creation of the reporter, Jenkins, who rarely left his humble abode, preferring to invent his stories about the latest shocking antics of important people. 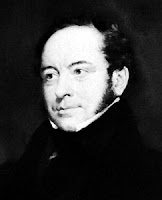 In my opinion the worst of them all was Theodore Hook, a charming and pleasing fellow who came into the Regent’s favor as a very young man, winning a government job at the ocean paradise of Mauritius. Hook lived an idyllic life for four years until a clerk embezzled lots of money that was Hook’s responsibility. He returned to London under a cloud and, in 1820, to make back the income he lost with his government job he started the Sunday newspaper, The John Bull.

Unlike the Hunt brothers, Hook allied himself with the Prince Regent and whipped up scandal and gossip about prominent Whigs. Favorite targets included The Regent’s estranged wife Queen Caroline and the ladies who attended her. One he branded as ‘strangely susceptible to the charms of her own sex’ ; another he accused of having “criminal affection” for a menial servant (Wilkes, 2002).

Hook had no qualms about paying servants to betray their employers, but most of what he learned was through his own ears. Hook succeeded in keeping it secret that he was the editor of The John Bull. Because he was well-connected enough to move in high circles, he dug his dirt in anonymity, from the very people who extended him their hospitality. Such inside information had huge appeal and the newspaper flourished.

In this secret position of power, Hook mercilessly pilloried those who crossed him. When suspicion grew that he was the editor of the Bull, Hook even wrote a letter to the editor (himself), protesting that he was not the editor. He was a known prankster. In his most famous prank, The Berners Street Hoax, he wrote 4000 letters calling for tradesmen, delivery men, professional men such as physicians and dentists, potential empoyers, wig-makers, dressmakers, members of Parliament and of the aristocracy, all to descend upon the house of an innocent middle-class woman, Mrs. Tottenham. While the street became clogged with people, Hook and his friend stood by and laughed. All I can think of is what a cruelty this was to all those people who were only going about their ordinary lives. He cost them all time and money and dignity.

When Queen Caroline died The John Bull turned to more serious journalism. Eventually Hook was made to pay for the embezzlement, a huge amount that took all his assets and landed him in debtor’s prison for two years. After prison he turned to writing novels, none of which were particularly distinguished. He continued his high living until his liver gave out and he died at age 53.

In Lorene’s story there isn’t any journalist quite as reprehensible as Theodore Hook, but the shady tactics and irresponsible journalism of the Regency are depicted once again, as I depicted them in Scandalizing the Ton.

The next book in the Scandalous Summerfields series is Genna’s story, Bound By One Scandalous Secret. Watch my website for more news about this new release, coming in print form November 22 and ebook December 1! The cover should be coming soon.

Who else is finishing a book? Are you writing it or reading it? Or both?

Thanks to Scandal: A Scurillous History of Gossip by Roger Wilkes, Atlantic Books, 2002, for most of this information