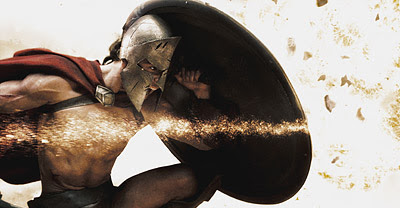 What does the movie 300 have to do with the Regency period? Other than my eager anticipation, that is. I’ve now seen the move THREE times and, needless to say, I LOVED it. Not only was it visually stunning (and I’m not referring to the Spartan abs; one quickly accepts the undress as costume), it was marvelously acted (Gerard Butler was superlative. He totally inhabited the role of Leonidas), and quite emotional. 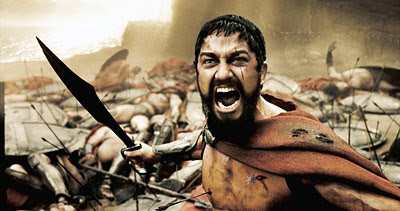 It also was very violent. I talked my friend Katie in to seeing the movie with me by saying, “The violence is so stylized, Katie, it won’t bother you.” Then watching the movie with her, I suddenly saw the blood and carnage. There are reasons it is rated R.

For those who may not know, 300 is based on a graphic novel by Frank Miller. It tells the story of the Battle of Thermopylae in 480 BC, when 300 Spartans sacrificed their lives battling the largest Persian army ever assembled. This battle is considered a pivotal event in history preserving Western Civilization. The movie was filmed against a blue screen; the setting and special effects were computer generated, making it a whole new movie-going experience. 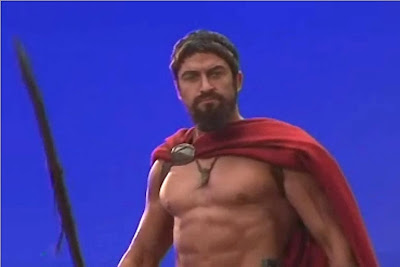 This is, however, a Risky Regency blog. So what does 300 have to do with the Regency?

1. Regency education included studying Greek and Roman texts. I could imagine Regency boys reading Herodotus’s history of the Battle of Thermopylae and being as enthralled as the young guys in the movie theater. After the movie, one of them said, “That was awesome!” 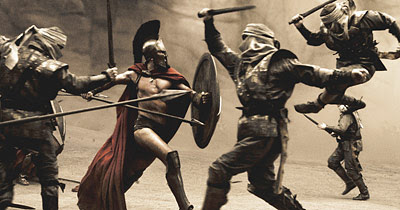 2. I also imagine that military men in the Regency studied the Battle. King Leonidas chose the High Gates, a narrow passage through the mountains, as the best place on which to fight the Persians. The terrain gave the massively outnumbered Spartans enough advantage to cause huge Persian losses. Wellington also used terrain to advantage. He picked the location of Waterloo for its advantage and at a crucial moment in the battle hid his troops behind a hill, surprising the French and helping to turn the battle around to victory. 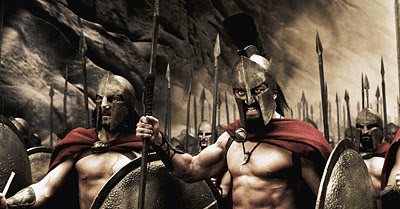 3. The Spartan’s use of the phalanx formation, forming a line of shields and spears that made them impenetrable by the attacking Persians. In the Napoleonic Wars, when infantry formed squares, they were similarly impenetrable. At Waterloo, Wellington’s squares held over onslaught after onslaught by French cavalry. 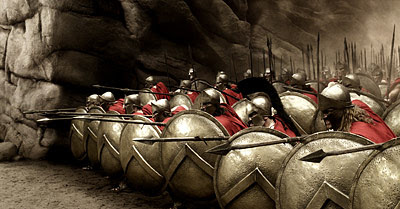 4. After the Persian King Xerxes won at Thermopylae, his army pillaged Athens and destroyed its temple. The Parthenon replaced that temple. During the Regency, Lord Elgin rescued (purloined??) the marble friezes and took them back to England hoping in vain, to earn a fortune for them. The Elgin Marbles remain in the British Museum, and, coincidentally, 300 premiered in London March 14. 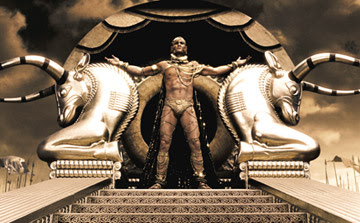 5. In 1823 Lord Byron traveled to Greece to join the movement for Greek independence from the Ottoman Empire. Before he could participate in battle, though, he died of fever. In his Don Juan canto, he wrote about Thermopylae:

Must we but weep o’er days more blest?
Must we but blush? — Our fathers bled.
Earth! render back from out thy breast
A remnant of our Spartan dead!
Of the three hundred grant but three,
To make a new Thermopylae.–Don Juan, Canto iii, Stanza 86

On March 20 on the Wet Noodle Posse blog and the Warner Women blog, I’m going to talk about what the movie 300 can teach us about story-telling.
About love scenes 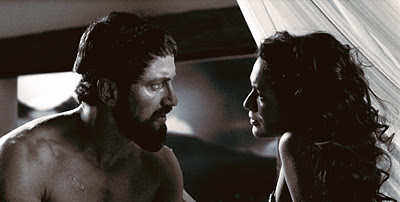 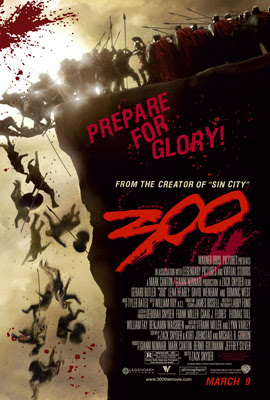 Have you seen 300 yet? What did you think? Can you think of any other connection to the Regency?

Remember this day, men, for it will be yours for all time–King Leonidas