So last weekend was my birthday! I got many lovely gifts, including the books Vauxhall Gardens: A History (thanks to Diane for the rec!), Versailles: A Private Invitation, and The Empire’s New Clothes: The Russian Fashion Industry 1700–1917. These will all keep me busy for quite a while. But what I really love about birthdays is cake!!

The Regency period wasn’t a big one for elaborate birthday celebrations, though there might be a special meal and small gifts of books and embroidered handkerchiefs and things like that, but even then people did like their cake. They probably didn’t have one like mine (which was this “Princess and the Frog” model), so I went to consult my bookshelves to see what they might have had. I pulled out Ian Kelly’s fascinating book, Cooking for Kings: The Life of Antonin Careme, First Celebrity Chef.

Careme is said to have invented the chef’s toque as well as the souffle, and he lived in remarkable times, being chef for the French royal family as well as Napoleon (he made the Emperor’s wedding cake when he we Queen Marie Louise!) before moving on to the Russian court, the Prince Regent’s household, and the Rothschilds. I found this recipe for Genoises Cakes a La Maraschino in the back of the book. (The historical note states that it was made at the Bighton Pavilion and Carlton House around 1817: “Maraschino, the Prince Regent’s favorite liqeur, was used repeatedly by Careme to flavor Brighton Pavilion recipes”).

I don’t quite have Carolyn’s dedication to hands-on research, so I can’t vouch for how this tastes! If you try it let me know how it turns out…

Pound together 4 ounces of sweet almonds, half an egg white and then add six ounces of flour and six ounces of pounded sugar. Mix and add the zest of an orange, two whole eggs and a spoonful of brandy, a grain of salt and a splash of cochineal. Stir this for a full six minutes with a spatula, then take six ounces of butter, softened in the mouth of an oven, stir it a little, and then put it in the corner of a tureen, mix it with a little of the paste, and then more, stirring the whole for 4 or 5 minutes longer. Spread on a baking tray to the thickness of half an inch and level with a knife. Put in a slack (???) oven and as soon as the genoises are firm, cut them in all kinds of shapes, after which put them back in the oven to crisp 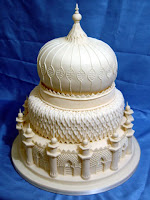 What is your favorite kind of cake? What would you choose for your birthday if you lived in the Regency? (And I love this Brighton Pavilion-shaped cake…) 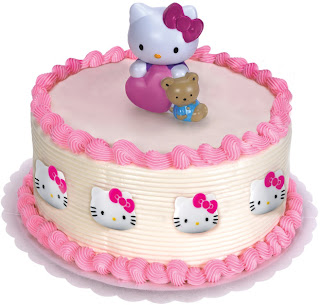 Here at Riskies, we just finished celebrating our blog birthday celebration! This week is Risky Megan’s birthday, plus another friend of mine is having her birthday party tomorrow night (note to self: go buy card!), so birthdays are on my mind today. And what’s the best part of a birthday? (besides getting bookstore gift cards, that is…) Cake of course! So I was curious and looked up a very brief history of the birthday cake…

It seems that our idea of a birthday cake dates to around the middle of the 19th century (the Victorians liked to do everything up big–weddings, funerals, birthdays), but cake associated with special occasions goes back to the ancient Greeks. In Greece and Rome, cakes that resembled flat rounds made with nut flour, leavened with yeast and sweetened with honey, were served at important birthdays and weddings. Candles seem to have come from this time as well, since it was believed that covering a cake with lighted candles made it glow like the moon (so it was often an offering to Artemis, virgin huntress goddess of the moon). It’s also thought that the smoke from the candles could carry prayers to the gods–maybe a precursor to our idea of the birthday wish?

In parts of Germany in the 15th century, some savvy bakers hit on the idea of making special one-layer cakes for customers’ birthdays. By the 17th century, the upper classes had cakes much like our own idea of a proper birthday cake–multi-layered, icing, decorations. Elaborate birthday parties seem to be a Victorian thing–the Victorians really liked doing everything up big (weddings, funerals, etc). In the Regency, birthdays would be celebrated but in a more low-key way–a special dish at dinner maybe, cakes, gifts like handkerchiefs or books. But a well-known personage’s birthday was always more elaborate. A letter written in 1799 by Goethe says, “…when it was time for dessert, the prince’s entire livery…carried a generous-size torte with colorful flaming candles – amounting to some fifty candles – that began to melt and threatened to burn down, instead of there being enough room for candles indicating upcoming years, as is the case with children’s festivities of this kind…”

Oh, and the song “Happy Birthday” became popular in the early 20th century (it first appeared in print in 1912). Now it’s the number one most recognized song in the English language…

Here is a recipe for a black forest chocolate cake I always like on my birthday! (but I’ll have to wait a while for it, since my big day is not until January…)

Of course, if you feel like going the opposite direction, there is always Cake Wrecks for inspiration. I love that site!

What do you do on your birthday? What’s your favorite kind of cake?

The Door is This Way

Jane Austen: Good morning. Is it morning? Do you know the date?

YT: Yes, but I’m not telling you on account of you might be shocked how long it’s been since the last time you were sitting around yakking. By the way, it’s your birthday tomorrow.

JA: It is? How lovely. Thank you so much for mentioning my special day–

YT: Right. Special day. Before we talk about your fav cake and shit, can I ask you a question?

YT: You had doors in your house back in the Regency, right?

YT: Good. What did they look like? Because I need to know. I’m trying to write this scene—

JA: You’re an authoress? What a coincidence. I too–

YT: Yes, but only if we define writer as someone who procrastinates any actual writing until there’s nothing left of her soul except panic and the need for caffeine, sugar and cocoa butter and who when she’s freaking hyped up on the stress with like smoke coming out of her ears before she actually gets decent words on the page, finally does something you could call writing. Sort of. Does that sound familiar to you at all?

JA: I think I’m getting a call. (Digs in her reticule.)

YT: They didn’t have cell phones when you were writing. So listen, about Regency doors. I have this scene where the hero and heroine are in this room and they’re alone, but one of them wants to leave, I can’t decide who yet, but that doesn’t actually matter. The point is whoever tries to open the door, when they do that the handle falls off and they get temporarily stuck only I don’t know if they had door knobs back then.

YT: Crap. Did they have door knobs? Do you know who invented the door knob? Because actually, when I Google, the results are unclear.

JA: I beg your pardon?

YT:  I’m thinking I may have to email the Antique Doorknob Collectors of America or buy one of their books, but I don’t know which one to get. Ack!

YT: Some of us are obsessed. OMG! Look at those doors and hardware. So pretty!

JA: Where is my vinagrette?

YT: You know what I really hate?

JA: Could we go back to talking about cake?

PS. Was I supposed to do a contest thinggee? OK. Comment and I’ll figure out a prize. Not cake, though.