Are you familiar with this lovely item from the V&A Museum in London? I was not, until I recently received a postcard of this from a friend visiting London, who wrote “Look This Up Online” after his brief message. All of you who do research know what happened after that! Alice down the rabbit hole…. Ah, but there is so much more to what happened than that.

“Tippoo’s Tiger” is actually very famous and has been an object of curiosity ever since it was first displayed publicly in London in 1808. It is a nearly life-sized wooden sculpture, an automaton (the victim’s arm moves, and the tiger growls while the man cries out), a playable miniature organ with 18 pipes, and not least, a political statement by an Indian ruler whose hatred for the British is very clear.

The timing of my friend’s postcard was one of those Twilight Zone-ish coincidences that feel like messages. Synchronicities that happen during research never cease to thrill me. They feel like little gifts from the universe confirming that I’m doing what I’m supposed to be doing. When his card arrived, I had just –I mean, literally days before –stumbled across some other East Indian-connected anecdotes in a most unlikely place, while I was researching something entirely unrelated. But I had jumped on them, because they tied in with a project I had moved to the “back burner” –revisions I’ve mapped out for the reissue of my 1998 Signet, The Magnificent Marquess, with a hero who spent most of his life in India. I had been reading Sarah Markham’s book, A Testimony of Her Times, Based on Penelope Hind’s Diaries and Correspondence 1787-1838. That’s research for the Christmas novella I am working on. But blessed Penelope repeated two tales of British subjects who survived tiger attacks in India. And then came the postcard! Message received –I’m back at work now on the TMM revisions. And my characters are definitely going to visit the museum, now that I have no length restraint on the story!

Tippoo’s tiger figure may have been based on the same incident that inspired this Staffordshire pottery figurine (c. 1814) showing the 1792 death of British subject Hugh Munro in India (now in the British Army Museum).

The fact that stories about encounters with Indian tigers circulated all the way out into the country where a parson’s wife like Penelope Hind received them is a good reflection of how fascinated people were becoming with things East Indian during her lifetime. That fascination was multi-faceted; it included a kind of horror mixed with admiration, and for many, but not all, a growing sense of justification for the East India Company’s expanding domination. The tiger became not just Tippoo’s personal emblem, but a symbol of resistant India itself –a symbol used for the medals issued to the men who fought at Seringapatam

, and in political cartoons, and much more as the century advanced. I tried to give a sense of the variety of attitudes about India that existed during the Regency period in my novel.

The life and times of Tippoo (also spelled Tipu) inspired written accounts that I have not even begun to look into –most of this East Indian connection is just background for my story’s hero, at any rate. But besides the first published account about the final Mysore war, published in 1800 by James Salmon,

Tippoo and his exploits figured prominently in art, literature and drama far into the 19th century. According to an article on the V&A’s website, “the Storming of Seringapatam unleashed a flood of prints and broadsheets. It inspired one of the largest paintings in the world, exhibited in London as a panorama. It was featured as a vast spectacular at Astley’s Amphitheatre, and cut down to size for the juvenile drama. As late as 1868 it set the scene for Wilkie Collins’s novel The Moonstone.” I am also now aware that G. A. Henty wrote a fictional account, The Tiger of Mysore, and then there’s Bernard Cornwell’s offering in the Sharpe series, Sharpe’s Tiger (which I have not read yet, but now I want to!). Have you read any of these?

An end-note on Tippoo’s Tiger: Tippoo’s Tiger was on display at the East India Company until 1858, after which it was stored, then displayed in the new government India Office, and then in the India Museum. It became part of the Victoria and Albert Museum’s collection in 1880. The musical and noise-making aspects of Tippoo’s Tiger suffered over the years from public exposure and use, and gradually fell into disrepair. Eventually the crank-handle that powered the bellows inside the tiger disappeared. Not everyone was disappointed in this, however, as was noted in The Athenaeum magazine in 1869: “These shrieks and growls were the constant plague of the student busy at work in the Library of the old India House, when the Leadenhall Street public, unremittingly, it appears, were bent on keeping up the performances of this barbarous machine. Luckily, a kind fate has deprived him of his handle, and stopped up, we are happy to think, some of his internal organs… and we do sincerely hope he will remain so, to be seen and admired, if necessary, but to be heard no more”.

I’ve only scratched the surface here. For more information about Tippoo, his tiger obsession and his mechanical tiger, check this article offered by the V&A, or google the topic to find lots more!

Did you already know about Tippoo’s Tiger? Do you like stories that have an East Indian connection? Do you get distracted by fascinating historical diversions when you are doing research? Or how about those research synchronicities? Have you had those happen to you? What happened and how did you feel?

I’ve been enjoying my research into India during the Regency for Wolfe’s story (Wolfe of the Ternion in The Marriage Bargain). The story will begin in India, assuming Warner’s approval of my next idea, but will mostly take place in England.

I’ve discovered some interesting things about the English in India. In the early years of the East India Company it was not uncommon for the English company men to adopt a native lifestyle, native dress, taking Indian wives. Such men were tolerated in the early years and not much was made about them, but later, closer to our time period, adopting native habits was beginning to be frowned upon or looked upon with suspicion. Typically, by the Victorian age, it was not tolerated at all, given the certain belief that the British were superior in all ways. 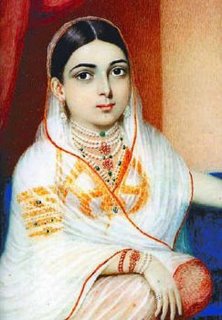 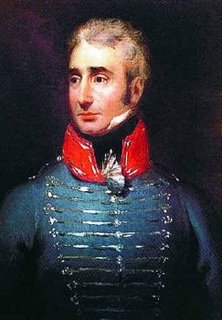 I’m reading White Mughals: Love and Betrayal in Eighteenth Century India by William Dalrymple, which tells the story of James Achilles Kirkpatrick, a Colonel and an Ambassador, who married Khairunnissa, the daughter of an Indian noble family. Kirkpatrick converted to Islam to marry her and—according to a web article—spied for the Nizam against the British. The marriage was a happy but brief one, lasting only four years. The couple produced two children who were sent to England. Shortly after, Kirkpatrick unexpectedly died. It was 1805. Their mother never saw them again. She was soon seduced by Kirkpatrick’s assistant and kept as his mistress until she died a few years later at age 27.

At the time of Kirkpatrick’s marriage, one of the British who expressed concern over Kirkpatrick’s allegiance to Britain was Colonel Arthur Wellesley, in India after vanquishing the Tipu Sultan. 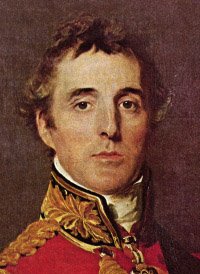 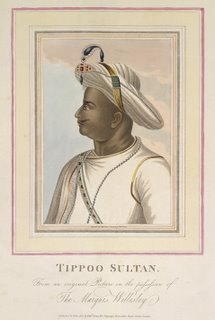 In the book Original Letters from India by Eliza Fay there are interesting details about life in India, but also a great amount of detail about her travel to India. Across the Suez, her caravan was attacked. And later, finally in India, the ship was boarded by the local Indian governor’s soldiers and Eliza, her husband, and the other passengers and crew were taken prisoner. She hid their watches and other small treasures in her hair.