In my internet perusing I came across this post at one of my favorite websites: Letters of Note. 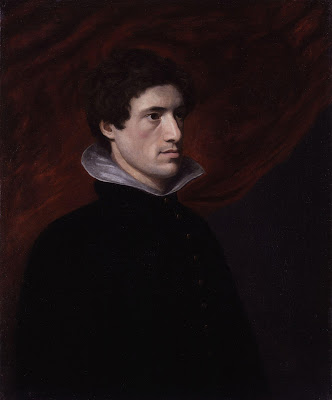 One: Lamb was a hottie.
Two: He could wax effing eloquent about a cold. Who among us hasn’t felt like this:

If you told me the world will be at an end to-morrow, I should just say, “Will it?” I have not volition enough left to dot my i’s, much less to comb my eyebrows; my eyes are set in my head; my brains are gone out to see a poor relation in Moorfields, and they did not say when they’d come back again; my skull is a Grub-street attic to let—not so much as a joint-stool or a crack’d jordan left in it; my hand writes, not I, from habit, as chickens run about a little, when their heads are off. O for a vigorous fit of gout, cholic, toothache&-an earwig in my auditory, a fly in my visual organs; pain is life—the sharper, the more evidence of life; but this apathy, this death!

Dude. That was one miserable cold. Go read the entire letter.

Here’s one of his poems:

A Timid Grace Sits Trembling in her Eye

A timid grace sits trembling in her eye,
As loath to meet the rudeness of men’s sight,
Yet shedding a delicious lunar light
That steeps in kind oblivious ecstasy
The care-crazed mind, like some still melody:
Speaking most plain the thoughts which do possess
Her gentle sprite: peace, and meek quietness,
And innocent loves, and maiden purity:
A look whereof might heal the cruel smart
Of changed friends, or fortune’s wrongs unkind:
Might to sweet deeds of mercy move the heart
Of him who hates his brethren of mankind.
Turned are those lights from me, who fondly yet
Past joys, vain loves, and buried hopes regret.

Lazy-bones, lazy-bones, wake up and peep;
The Cat’s in the cupboard, your Mother’s asleep.
There you sit snoring, forgetting her ills:
Who is to give her her Bolus and Pills?
Twenty-five Angels must come into Town,
All for to help you to make your new gown-
Dainty aerial Spinsters & Singers:
Aren’t you asham’d to employ such white fingers?
Delicate Hands, unaccustom’d to reels,
To set ‘em a washing at poor body’s wheels?
Why they came down is to me all a riddle,
And left hallelujah broke off in the middle.
Jove’s Court & the Presence Angelical cut,
To eke out the work of a lazy young slut.
Angel-duck, angel-duck, wingèd & silly,
Pouring a watering pot over a lily,
Gardener gratuitous, careless of pelf,
Leave her to water her Lily herself,
Or to neglect it to death, if she chuse it;
Remember, the loss is her own if she lose it.

‘Fie upon’t!
All men are false, I think. The date of love
Is out, expired, its stories all grown stale,
O’erpast, forgotten, like an antique tale
Of Hero and Leander.’

All are not false. I knew a youth who died
For grief, because his Love proved so,
And married with another.
I saw him on the wedding-day,–
For he was present in the church that day,
In festive bravery decked,
As one that came to grace the ceremony,–
I marked him when the ring was given:
His Countenance never changed;
And, when the priest pronounced the marriage blessing,
He put a silent prayer up for the bride–
For so his moving lip interpreted.
He came invited to the marriage-feast
With the bride’s friends,
And was the merriest of them all that day:
But they who knew him best called it feigned mirth;
And others said
He wore a smile like death upon his face.
His presence dashed all the beholders’ mirth,
And he went away in tears.
What followed then?
O then
He did not, as neglected suitors use,
Affect a life of solitude in shades,
But lived
In free discourse and sweet society
Among his friends who knew his gentle nature best.
Yet ever, when he smiled,
There was a mystery legible in his face;
But whoso saw him, said he was a man
Not long for this world–
And true it was; for even then
The silent love was feeding at his heart,
Of which he died;
Nor ever spoke word of reproach;
Only, he wished in death that his remains
Might find a poor grave in some spot not far
From his mistress’ family vault-being the place
Where one day Anna should herself be laid.

I keep forgetting how much I like poetry. It’s good to be reminded.

Posted in Former Riskies, Regency, Research | Tagged Charles Lamb, poetry, THIS is how you complain about a cold | 6 Replies

A Poem for Christmas Day

Snow covers graves and other things,
snow covers leaves and even wings.

and in the morning shake red heads
between the whitely powdered beds.

though while snow covers graves and wings
the flower that is heaven sings.

March 6 marks the birthday of one of my favorite poets, Elizabeth Barrett Browning! (in 1806, so she would be, er, 206…). It also seems appropriate for a romance writers blog, since she and Robert Browning had one of the great romances in literary history…

Elizabeth Barrett Moulton-Barrett was born at Coxhoe Hall in County Durham, England, the eldest of the 12 children of Edward and Mary Barrett Moulton-Barrett (it seems like a good idea for her to just go by one of those Barretts…). The family’s fortune originated with family plantations in Jamaica, and were later reduced by a lawsuit and by the abolition of slavery in the UK. In 1809, after the birth of Elizabeth’s sister Henrietta, Edward bought Hope End in Herefordshire, and ideal place for raising a family. Elizabeth was educated at home, attending lessons with her brother’s tutor which gave her a firm foundation in languages and literature. By age 10, it was said she could recite Paradise Lost and various Shakespeare plays; her first poem was written at age 8, and by 12 she had written an “epic” poem of 4 books of rhyming couplets. At 14, her father paid for the publication of her Homeric-style poem The Battle of Marathon. During this time she was known as “a shy, intensely studious, precocious child, yet cheerful, affectionate, and lovable.” Her friend Mary Russell Mitford described her as “A slight, delicate figure, with a shower of dark curls falling on either side of a most expressive face; large, tender eyes, richly fringed by dark eyelashes, and a smile like a sunbeam.”

But by the age of 20, Elizabeth was felled by a mysterious illness, made worse by her use of morphine for the pain. In 1824, the London paper The Globe and Traveler printed her poem Stanzas on the Death of Lord Byron, around the same time her father’s Jamaica property began to go downhill. In 1826, she published her first collection of poems, but by 1830 Hope End had to be sold and the family moved 3 times between 1832 and 1837 (first to Sidmouth in Devonshire, where they lived for 3 years, then to Gloucester Place in London, where she wrote more poems and articles). Finally they settled at 50 Wimpole Street, where a family friend, John Kenyon, introduced Elizabeth to the literary luminaries of the day, including Wordsworth, Coleridge, Tennyson, Carlyle, and Mary Russell Mitford (who became her good friend, and helped her to publish more of her work).

In 1838, at her doctor’s advice, Elizabeth went to live for a time at Torquay along with her brother Edward. His death by drowning there in 1840 sent her into a terrible downward spiral, and she returned to Wimpole Street as an invalid and recluse, kept company mostly by her beloved spaniel Flush. She kept writing, though, and in 1844 two volumes were published, A Drama of Exile, a Vision of Poets and Lady Geraldine’s Courtship. These volumes made her one of the most popular writers of the time and inspired Robert Browning to write her a fan letter. Kenyon arranged for them to meet in May 1845, and thus began the most famous courtship in literary history.

She was six years his elder and an invalid, and it took some time for Robert to persuade her that his love was real. Her doubts were expressed beautifully in her most famous volume, Sonnets From the Portugese, which she wrote over the next several months. They finally eloped to the church of St. Marylebone and then ran off to Florence, with Elizabeth disinherited by her father (who did the same to all his children who dared marry!). But she had some money of her own, and they sold their poems for a comfortable life and happy marriage in Italy. Her health improved in the sunny weather, and in 1849, at age 43, she gave birth to their son Robert, always called Pen. Her writing went well, too. In 1850, on the death of Wordsworth, she was shortlisted for the position of poet laureate, but it went to Tennyson. 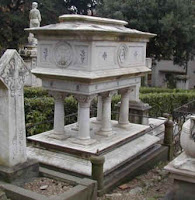 Elizabeth Barrett Browning died on June 29, 1861 and was buried at the English Cemetery in Florence.

Who are some of your favorite poets?? What are some romantic couples in history you like to read about?