The Bodleian Goes Digital and A Ship That Sank in 1744

I’m coming down to the line on finishing my novella for the upcoming anthology Christmas in Duke Street. Despite being madly writing, I have great sites I came across recently.

When I was in grad school and researching a Regency era author named Eleanor Sleath, I was also frequently side-tracked into other fascinating areas of research that was quite handy for writing Regency Historical Romance. One of the most tantalizing things I came across was the Ephemera collection at Oxford’s Bodleian Library. At the time, a handful of images had been made available. It happened that their server was misconfigured and I was able to get to a directory listing of the ephemera collection and could see that they had playbills, and I was searching for performances of a certain play. I wanted to look at those playbills so badly …. A trip to the UK was out of the question. Well, the Bodleian has put this collection on line and searchable along with other collections: Digital Bodleian.

Here’s some playbills in the Ephemera collection: Playbills (None are the play I was looking for, alas.)

Here’s a ticket for a ball given by the Lord Mayor: ticket

Then there’s this letter to the Editor:

(Hopefully that lands you at the enlarged image. If not, click on the magnifying glass.)

To the Printer of the DIARY.
SIR,
My attention being roused by the claims of different countries to the Artist who produced the Exhibition of Edinburgh in the Haymarket, I went to see a work, which, from the contention, promises to have so much merit. I expected to have seen a model like that of Rome, or London; for transparent painting, such as I’ve seen before; but was agreeably surprised to see, I will venture to say, the greatest curiosity ever exhibited in painting, without any deception but that of the pencil, laying nature fairly open to my view, in a manner entirely new.
I ever wish to see the arts flourish; I hope this extraordinary effort of ingenuity will meet its reward: to doubt it would be an insult to publick taste.
Yours, &c.

I had to (digitally) go to a library in Australia to find out what this letter was about. Here’s the link. I’m sorry, it’s a pdf and I sure hope the link works.

The letter first refers to an exhibition in the Haymarket of a panorama of Edinburgh by Irish painter Robert Barker. (Thus, the artist referred to is Robert Barker) This was something of a sensation. No one (according to these sources) had ever painted a panorama before, nor lit and placed it as Barker did. The panorama was 7.5 meters long and was exhibited in London in March of 1789. It stayed on view until 1790. Barker then prepared a panorama of London.

Indeed, this source claims that Barker’s friends coined the word “panorama” to describe this ability to walk around a painting as if one were actually at that location in the world. From this, Barker, and after his patent expired, other artists, produced panoramas of other cities and countries. This letter seems to be referring to a subsequent exhibition of other countries. Barker, having succeeded wildly, built an exhibition hall behind his home at 28 Castle Street Leiscester Square. A larger structure was built at another location, also in Leiscester Square by 1793. The Royal family visited and was much impressed. Panoramas were a popular entertainment through the 1850s.

The Independent has a fascinating article about why the HMS Victory sank. It sure wasn’t what I thought. This article is a great overview of the ship and its history, with a dose of climate, bureaucracy, and bad design thrown in.

The tragedy was not caused by dangerous rocks and the failure of the Alderney lighthouse keeper to keep the fire burning as believed at the time. The reasons for the Victory’s loss were almost certainly poor ship design, top-heavy weight, instability caused by heavy guns and possibly rotting timbers. victory1744.org

For more about this ship, there’s a website dedicated to it: victory1744.org. The photos of the wreck in-situ are stunning.

While I was putting together this post, one of my searches led to a site about pens, which I clicked on because pens! I’m addicted to fountain pens. When I was done, I went to the pen site and discovered that this company sells pens made with wood from the hull of the HMS Victory. Here’s the page about that. And here are the HMS Victory pens they sell.

I may have mentioned recently finishing Warner book #3, untitled and awaiting a publication date. This is Blake’s story, one of the hero’s friends in The Marriage Bargain. Right when I was tearing out my hair and gnashing my teeth to finish Blake’s story, my copy edits came for Innocence & Impropriety, the story of Rose from A Reputable Rake. I finished those in a record (for me) two days, then had to jump in to the next Mills & Boon, following a character from Innocence & Impropriety. That done, I decided I ought to plot the next Warner book, too, because I’m going to NYC to see my editor this coming Friday (and to see Phantom of the Opera on Broadway and Beowulf & Grendel in the movie theatre). The next Warner book is Wolfe’s story.

I like to start my books off with something really exciting, a task that gets harder and harder to do, but sometimes turns out to spark ideas for the rest of the plot. I may also have mentioned that story ideas do not exactly flood my brain and keep me awake at night.

For my big bang openings for Harlequin/Mills & Boon I’ve done lovemaking in a gaming hell (hee hee, pardon the pun), a Gretna Green wedding, and an attack in Hyde Park. This time I decided it would be nice to put my hero and heroine in a shipwreck. So I did my usual thing and bought as many books on shipwrecks that I could find and afford.

I bought Shipwrecks of the Revolutionary & Napoleonic Eras by Terence Grocott (1197 Stackpole Books), and Life Before the Mast by Jon E. Lewis, ed.(2001, Castle Books). I already owned A Sea of Words by Dean King (1997, Henry Holt and Co., Inc). And, of course, I tore through whatever I could find on the internet. The shipwreck scene was a lot of fun to write and I hope it comes off sounding real. I also hope my editor approves the story, because now I am dying to write it.

For Warner my big openings have included childbirth, a duel in which the hero is slain, and a tryst with a mysterious French thief (Blake’s story), but I need something very exotic for Wolfe.
I want to begin Wolfe’s story in India, where he will travel to learn about his Indian roots–he’s one quarter Indian and his father is (gasp) in Trade. I’d already collected some books to help: The East India Company by Antony Wild (1999, Harper Collins); Begums, Thugs & White Mughals, the Journals of Fanny Parkes (2002, Eland Publishing); White Mughals: Love & Betrayal in Eighteenth Century India by William Dalrymple (2002, Penquin Books). I found Original Letters from India by Eliza Fay, EM Forster, ed, (1986, Hogarth Press) when I was in Alabama for my High School reunion, and I just bought Raj: The Making and Unmaking of British India by Lawrence James (1997, St. Martins Press). But none of these books were giving me my huge opening.

Scouring the internet about India in the nineteenth century, I came across several first hand accounts of sati (or suttee, as it is sometimes spelled), the practice of a wife throwing herself on the funeral pyre of her deceased husband and burning alive. 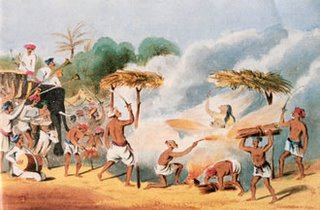 Now that will make a bang up opening! The heroine being forced into the flames when the hero rides to the rescue, snatching her from the consuming fire. I hope my editor loves the idea, because I really am itching to write that scene!

Now, I don’t want you to think I will actually read all of the books I mentioned above. I must keep up my reputation as the world’s worst read romance author. I do read bits of the books, though, unless one really captures my interest and I read every word. I read enough to tell me if my story idea will work and to give me enough knowledge of the topic to at least take a stab at writing it. Then as I write, I go back to the books and the internet and research whatever I need to at that moment. This may not be the most efficient way to do it, but it has worked for me so far.

I keep all my notes on the computer. I copy information from the internet. I might even summarize something from a book. I don’t make a collage for the story, but I do have a page I always call “Names” where I put down the facts and backstory for the main characters. I find a photo to use for my hero and heroine. Quite by accident, the photo I chose for the hero of this next Mills & Boon was one of Gerard Butler, chosen before I became one of the converted and actually knew who he was. For the heroine, I chose Jennifer Connelly, because she looks vulnerable but has strength underneath. For the Warner book, Wolfe is an actor named Adrian Green and the heroine is a beautiful Indian actress named Bridget Monynahan. But forget these images if you prefer to visualize on your own. The books will not be out until 2007 so you have lots of time to forget.

I don’t know when I’ll get the go ahead for the Mills & Boon but I expect to find out about the Warner book and Wolfe this Friday. If my editor doesn’t like it, at least I’ll still get to feast my eyes on another fictional character that night – Beowulf, played by Gerard Butler! 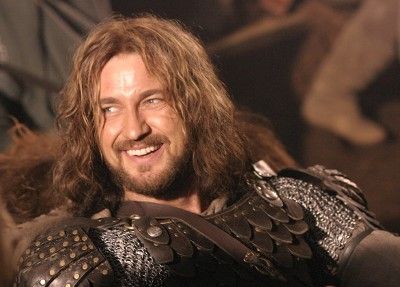 I’ll let you know how it goes next week.
Cheers,
Diane