Thinking of Portraits & a Cover Reveal

These past few weeks I’ve been thinking a lot about portraits in painting and the art of portraiture. This is perhaps hardly surprising as I needed to think about a cover for my new Roman story and also started a hashtag project on Twitter and Facebook (#FreePortraitFriday), where authors can share a description of their main characters and I’m going to pick one to do a free character portrait.

Those are excellent exercises for me as I don’t just have to think about how to visualize the verbal physical descriptions of a character, but also how to visualize the…eh…character of said character. Like, is that person shy or self-confident? Kind? Arrogant? Mischievous? Those character traits will translate into the pose and expression and are nearly as important as the physical characteristics.

A couple of years ago, there was an exhibition of children’s portraits at the Städel, a famous art museum in Frankfurt, and while I didn’t manage to go and see it, I did manage to snatch up a catalogue of the exhibition. The catalogue doesn’t just provide the reader with a good overview of the history and development of children’s portraits, but also invites the reader to look more closely at the small details. When you look at Joshua Reynold’s portrait of little Frances Crewe from 1775 (“Miss Crewe“), when more realistic portraits of children that emphasized their individual personalities rather than family and heritage, had just become all the rage, you can easily see what a sweet, funny little girl Frances must have been.

For his portrait of young Lewis Cage, the artist Francis Cotes chose a pose reminiscent of that of military heroes, hinting at the boy’s self-confidence. However, he immediately subverts this pose and we are reminded that this is a little boy, for in contrast to the men depicted in those military portraits, young Lewis looks far from neat and tidy: his waistcoat is unbuttoned, a corner of his shirt is hanging out of his breeches, which have become unbuttoned at his left knee. All those details add to the vitality of the portrait by hinting at the vitality and physicality of the child: he is dirty, sweaty, and stinky, but immensely proud of his achievements in cricketing.

And all those paintings of little children cuddling with their pets with obvious affection? How cute are those? Joshua Reynolds’ little “Miss Jane Bowles” (1775) exuberantly hugs her (long-suffering?) pet spaniel while smiling mischievously. And when Henry Raeburn painted his step-grandson in 1814 (“Boy and Rabbit“), he depicted little Henry as an affectionate young boy who tenderly cradles his white pet rabbit in his arm.

Posing is something I find rather difficult when I’m working with my digital models (and not the least because digital models don’t automatically pose naturally and, thus, if you don’t do it correctly you end up with a wooden-looking zombie — NOT the kind of look you really want to go for) (unless you’re doing a picture of a zombie, of course). To find the right pose (and the right camera angle) for a character often takes me quite a long time, and I typically need several test runs before I come up with something I’m happy with. As with those real-life portraits, it’s often the small details that add character to cover art.

A portrait of my centurion

A few days ago I got thinking about what to do with the cover of THE CENTURION’S CHOICE.  Which of my two guys should I put on the cover? Lucius, whom I used on the teaser image? Or Caius, the centurion from the title of the novella? In the end I settled on burly, cranky Caius – and after some puttering around, I ended up with the above picture. (I wasn’t able to find a digital version of a centurion’s armor, so I put Caius in a set of shiny Spartan armor.) But somehow, it just wasn’t quite right. I mean, he’s a good-looking dude, yes, but he looks a bit young-ish, and besides, Caius is described as being built like an ox. And this guy isn’t quite what I would call burly. So…more tinkering ensued!

Luckily, the muscles of digital models can be pumped up on demand and so I did some pumping (gosh, that was too much….), tried to add some muscle definition to his lower arms, and…oh, what about body hair? *Sandy wanders off to investigate digital options of adding body hair, comes back slightly traumatized* Um. No body hair, sorry.

But I did change the camera angle somewhat and turned his hair windswept to make the whole thing look a bit more heroic. And finally, I ended up with – taaaahdaaaaah! – this cover draft. Which I quite like. 🙂 And I hope you do too!

THE CENTURION’S CHOICE will come out in late November / early December and will be my very first m/m story. 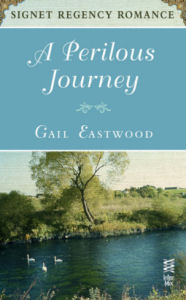 Hello everyone! Gail Eastwood here. I’m popping in for a visit thanks to the kind invitation of our Risky hostesses, most particularly Elena Greene, who has given me the opportunity to guest blog on first Fridays of alternate months. I am delighted to be here to share your gracious company and conversation, and also to help Elena gain a little more time to work on her newest work-in-progress. I have read a little of it and can’t wait for her to get it done!!

Some of you already know me, or may remember that I wrote Regencies for Signet back in the day, but for those who don’t, here’s a link to an interview Elena did with me a few months ago on this blog. Coming back to the writing realm after ten years makes me feel a little like Rip Van Winkle at times, so much as changed! It is indeed a brave new world, but I’m excited to jump into it.

If I may beg your indulgence, for this post I’d like to go back to the topic of cover art, picking up from Elena’s post of Sept 14. Elena shared her dilemma over “branding” her sexy short story Lady Em’s Indiscretion through her cover art. My own dilemma, as I prepared the first e-book reissue that I am doing myself, The Lady from Spain, was whether or not to go with a cover style similar to what the new Signet reissues have, or try something different.

The Signet reissue e-books have taken a very different approach to their cover design, and I have yet to see anyone discussing it or reacting to it, and I’m dying to know what people think! Three of my books are being done this way. 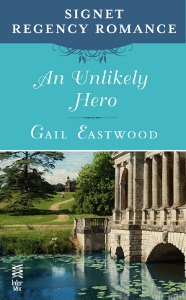 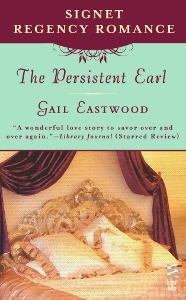 As you can see below, I opted for “different” for the ones I am doing myself–all part of the grand experiment. For LFS, I wanted something that would suggest the suspense of the story and still atleast hint at the Regency time period. The story takes place mostly in London… The reissue of The Captain’s Dilemma, my French prisoner-of-war story pubbed in 1995, is not ready yet, but I will be working on converting it next! 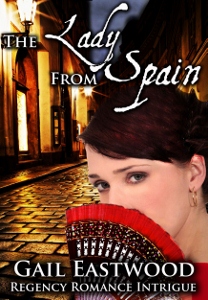 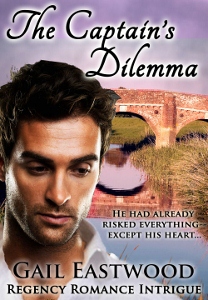 Here are the old versions of those covers. You can see more on my website or on my author pages at Amazon. 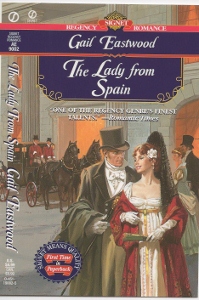 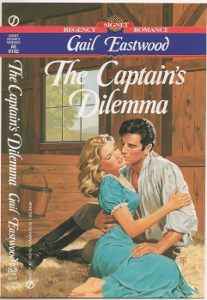 What “branding” messages do you get from the new ones? Like them? Dislike them? Do you want to see the characters, and if so, do you want to see both hero and heroine? What would you do instead?
If you’re interested in covers and/or how the designs have changed over time, here’s a link to a great website devoted to covers done by artist Allan Kass, who painted many Signet and other covers over a long career. It’s fun to look for your favorite authors in the archives, and sometimes recognize a favorite book!
Finally, I’m offering a free copy of The Lady from Spainto one lucky commenter, whose name will be drawn and announced by next Friday. So, please, join the conversation! And if you’d like to be part of the drawing, please be sure to include your preference for Kindle or Nook (the only formats available currently) or if you’re willing to wait for one of the other formats which will be available soon. Oh, and your email address!
Thanks so much for letting me visit with you today!
Gail Eastwood
www.facebook.com/GailEastwoodAuthor
www.gaileastwoodauthor.com
www.twitter.com/GEastwoodAuthor
Posted in Giveaways, Regency | Tagged A Perilous Journey, An Unlikely Hero, Book covers, cover art, Gail Eastwood, The Captain's Dilemma, The Lady from Spain, The Persistent Earl | 18 Replies

A German Attention to Detail 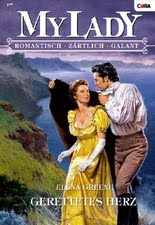 I recently learned that there is a German Kindle edition of SAVING LORD VERWOOD. I’m excited to be out in four languages now (there are Dutch and Italian versions of LADY DEARING’S MASQUERADE).

I’m also impressed with this cover. I liked many things about the original Signet cover (pictured below). The hero looks right (and hot, which never hurts), the house is the right style and period, and composition is pleasing. My only slight gripe was that the heroine should be a redhead, not a blonde. Since she had already appeared as a redhead in two previous stories, I chose not to rewrite her description to fit the cover. 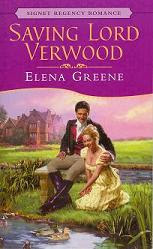 In contrast, the German cover accurately depicts both my hero and heroine. I also love, love, love that the artist took the time to recreate the stormy, craggy western Cornish coastline. This even looks like an actual scene from the book.

As an author, I love it when the cover art conveys my inner image of the characters and setting. As a reader, I used to be annoyed by cover art that didn’t match the story, but even before I knew about the cover art process, I guessed—correctly—that the authors might not always have much control over their covers. Now I enjoy it when a cover fits, but mostly I care what’s inside.

How do you feel do you feel about cover art being accurate to the story? What are some of the worst cover bloopers you’ve seen? Any covers that you thought suited the story especially well?