Animal Characters and a Sale!

A lot of my favorite romance authors include animals in their romances. In Regencies, we often have horses, but other animals, usually pets, can add fun to a story. Laura Kinsale usually (always?) includes some sort of “mascot animal” in her books, including a horse, a gyrfalcon, a shark, and a pig. Mary Jo Putney is a cat lover and many of her books include cats.

There are almost always named horses in my books, and some of my characters have had pets. I included goldfinches, a hedgehog, and a pony in Lady Dearing’s Masquerade, since there were so many children in that story who would enjoy them. In Saving Lord Verwood, the hero gives the heroine a kitten as a wedding present and later gives her the more practical gift of a mare to ride. Later, he also lets her talk him into rescuing an orphaned seal pup, which they later release back into the wild.

I got the idea for that story element after a visit to the Cornish Seal Sanctuary, a fun place to visit and learn about wildlife rescue. People at the center helped me figure out plausible ways for my characters to care for the baby seal.

This month, I’m running a 99 cent ebook sale of Saving Lord Verwood, with my share of the proceeds going to the Sea Life Trust which runs the Cornish Seal Sanctuary and other sea life centers.

Do you enjoy animal characters in Regency romance? What are some of your favorites?

While my critique partners and beta readers have been reviewing Lord Langdon’s Kiss, I’ve been working on another project: reuniting my “Three Disgraces” Regency series in an ebook bundle.

Comment on this post for the chance to win one of 5 copies on either Kindle or Nook. (Apple and Kobo are still in the works.)

The Three Disgraces includes reissues of The Incorrigible Lady Catherine, The Redwyck Charm, and Saving Lord Verwood. Although many Regency ladies were educated by governesses at hom, my three heroines met at one of those select schools for girls we sometimes read about. Although they’re very different in terms of birth, interests and temperament, none of them quite fit in for various reasons. And so they developed a warm friendship while defending themselves against the catty set at the school.

I had so much fun writing this trilogy. I didn’t really plot ahead, other than coming up with the issues each heroine would have to deal with and what sort of hero would challenge her the most. Somehow it all came together.  I’ve mostly written standalone books, but I have to admit it’s also a lot of fun to spend some time with characters you loved in a previous book, and help beloved secondary characters get their own stories.

Now I’m contemplating another series. This one involves more characters over a longer period of time, so I’m thinking I should maybe plan a little. Luckily, I have a writers’ retreat coming up which will be a perfect time to brainstorm.

Do you enjoy series? Why or why not? And for my fellow authors, how much planning do you do up front for your series? Any tips and tricks? 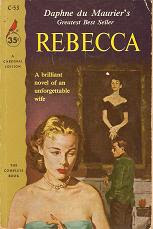 My introduction to Gothic romance was in high school, where I first read Jane Eyre and got sucked in by all the classic Gothic romance elements: a romantic but dangerous setting, an innocent and vulnerable heroine, a hero with Secrets. Later (having gone to an all-girl Catholic school) I also read Rebecca, a more modern Gothic that fascinated me and many of my classmates.

I suspect a lot of Gothic romance authors have been inspired by Jane Eyre, but Charlotte Bronte was by no means the founder of the genre. During the Regency, readers enjoyed Gothic romances such as those published by the Minerva Press. It was Ann Radcliffe who made them popular with examples like The Mysteries of Udolpho, which inspired much of the foolish behavior of Catherine, the heroine of Northanger Abbey. Although Jane Austen poked fun at Gothics, I suspect she enjoyed reading some of them herself. BTW I find this cover for Northanger Abbey very funny!

Gothics can go awry. I think the concept of the TSTL (Too Stupid to Live) heroine arose with romances in which the heroine runs off in her nightie, holding nothing but a candle, to investigate an eerie sound in the attic or cellar where dire events are suspected to have occurred.

I still like Gothic romance and I happily suspend disbelief to follow the characters into situations that are wildly unlikely in real life. I played with some of these elements in my recent reissue, SAVING LORD VERWOOD. I haven’t read many recent historicals like this (though I’m admittedly way behind in my reading) but dark paranormals provide the same thrill. A well-written romance with Gothic elements is like a piece of luscious chocolate. Who cares if it’s good for you? 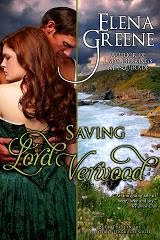 Do you enjoy romance with Gothic elements? What are some of your favorites, classic or modern?

I’ll be giving away 5 Kindle or Nook copies of SAVING LORD VERWOOD to commenters chosen at random. If you win, you can also nominate a friend to receive a free copy. Void where prohibited. You must be over 18. No purchase necessary. Post your comment by midnight EST on January 13. I will post an announcement on Saturday, January 14, so please check back to see if you have won.